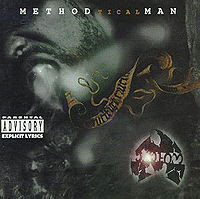 I love Method Man. There have been many times when I have briefly hated him, but he always wins me back. Wanna know why? Because is one of the best rappers on the planet. He has proven himself, for over 15 years now, to be the most reliable MC in hip hop. Lyrics-wise, at least. His solo albums? That's another story.

But, this one is a great story. It's about the first-ever Wu solo joint, and one that still remains in the top ten of all the Wu solo joints. It's about Tical, an album that I hear people sometimes saying isn't very good. Or they consider it "disappointing." Those people are idiots. Tical remains (and will probably always remain) Meth's one great solo record. It was recorded during that mid-90's period when the Wu (mostly the RZA) could do no wrong, and Method Man just completely fucking brings it on every cut.

You hear folks talk about "grimy" hip hop, and as much as I absolutely hate that term, it does work well to describe this one. It's dark, shoddily recorded, and just reeks like the stinkiest pot ever. The title track is slow, almost frustratingly so, and is probably the weirdest song Meth has ever recorded. The beauty part: he opens the record with it. I was so confused the first time I heard this, but I was intrigued. This wasn't going to be the fun-and-games Method Man that showed up on some of the peppier tracks on the Wu-Tang debut. This was going to be Meth getting high and getting inside his own head, and spitting some nutso shit.

And he does. And it's brilliant. Tracks like "Biscuits" and "Release Yo' Delf" are what Method Man is all about: lyrical stallionism. And the beats are dope as well. Pure mid-90's RZA. Forget about it. Those cuts are fairly accessible, but it's the ones like "Sub Crazy" and "What the Blood Clot" that get dark, stoned, and crazy inventive. "Mr. Sandman" uses both approaches, and is arguably the best song on the record. A great one.

Method Man in his prime, and he's untouchable. Yet, somehow he convinced himself that this record wasn't what everyone wanted. Maybe it wasn't what the radio wanted. And when he remixed "All I Need," put Mary J. Blige on that shit, and won a Grammy, it probably sealed the deal. He'd spend the rest of his solo career trying to please everyone, and fucking everything up in the process. We're getting to that.

Posted by Wockenfuss at 1:41 AM

I still hear people say that this album isn't that great. I honestly don't know how people can say that. This is the type of album that Meth should have kept on making. Awesome, yet slightly dark and odd. It's really hard to argue with songs such as "Release Yo Delf," "Meth Vs. Chef," and "Mr. Sandman," the latter of which perfectly captures all things wonderful about early Wu-Tang. Oh, and the opening line on "Biscuits" has to be one of the best ever: "Yo mama don't wear no drawers/I saw her when she took them off/Standin in the welfare line..." Awesome personified.

On a side note, the beat to "Tical" always sounds to me like it stole the verse part from a video game. Zelda maybe? Who knows>