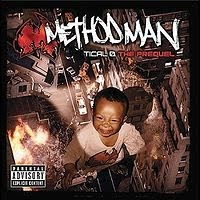 I didn't buy this disc until well after it came out, for a few reasons. First, the word on the street (and everywhere else) was not good. Second, I saw it in the store, peeped the guest appearances, and put it right back on the shelf. It's like a who's-who of suckery: Missy Elliott, Ludacris, Busta Rhymes, Snoop Dogg. If Meth thought he was trying to win the popular vote before, he must have been tired from his efforts. Because on this one, he was looking to take a shortcut to mainstream acceptance. And it's embarrassing.

Oh, I think I may have also seen Puff Daddy's name on the back of this thing, which is never a good sign. Anyway, I finally bought this a year or so ago because I had all of Meth's other albums and I found the CD for a few bucks. I keep it because I always convince myself that it's not that bad. Turns out, it's always way worse than I remember it. The beats are brutal. Just awful. Pretty much every single one. And worst of all, Meth sounds positively bored. I'm pretty sure this is the record where he says "I'm in the house like foreclosures." I mean, that one doesn't even make sense.

So, yes: when people tell you this one sucks, they're right. It's still Method Man, so there's some lyrical value to a few of the cuts (and the track with Ghostface is entertaining), but it's a rough listen. And how Streetlife got stuck rapping over the worst beats on the album is beyond me. Poor dude.

This still holds the prestigious title of worst Wu related album ever. At least to me it is. While some other lackluster Wu albums might be pretty rough this one has a surprisingly high number of songs that I would just never listen to ever. I mean they are that bad. Which is mind boggling since Meth is arguably the best rapper in the Clan. In my iPod "Tical 0" becomes a mediocre little 8 song album, and some of those are only hanging on by a thread. I mean that Redman and Snoop Dogg song is just straight lazy. And stupid. At least Meth had the decency to almost immediately bad mouth this one upon its release. However, that doesn't take away the fact that he made it. I honestly often forget that this album exists.