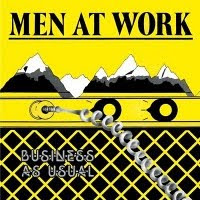 I actually have both the US version of this album, along with the white-covered original Australian pressing. So, you know, that's what I've got going on.

Like any red-blooded American kid, I loved Men at Work in their heyday. None of the Australian charm even occurred to me; I just thought "Down Under" and "Who Can it Be Now?" were solid cuts. And they are. I never thought much about them after that, until at some point during my early twenties, when a friend of mine was rocking their second album, Cargo, pretty steadily. And I enjoyed it. I owned a copy of Business as Usualat the time, but never really played it much. I revisited it, and fell in love all over again.

While Men at Work will always remain a misplaced 80's punch line, they deserve so much more. This record is radio-friendly pop music at its finest, with deeper cuts like "Underground" and "Be Good Johnny" sounding better now than the singles that made this record so popular. ("Be Good Johnny" may have been a single, but it was never as huge as "Down Under" or "Who Can it Be Now?") And Colin Hay is just a great singer.

The best thing about Men at Work? If you got yourself a turntable, you can pick up their entire discography for about three bucks.

"Be Good Johnny"
Posted by Wockenfuss at 1:21 AM

This only proves my theory that 1982 was the greatest year in music ever. Could this album cover be more terrible?