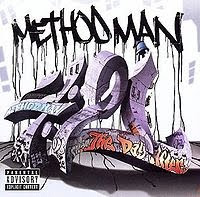 Just when you thought Meth couldn't come up with a dumber title than Tical 0: The Prequel, he reaches down deep and kicks out one of the stupidest album titles ever. Check it out y'all: he likes weed!

Aside from that, I was really into this album when it first came out. Method Man had set the bar so low for his solo records that the first two songs on this one sounded brilliant just because they didn't suck super hard. "Is It Me" is a lyrically sound song, which isn't surprising, but the Scott Storch beat sounds played out now. Still, the songs where Meth takes on his critics are always good, and it's those moments where this album really works.

Unfortunately, there's not enough of that. I was listening to this record the other day, and while there are still some songs I like ("Dirty Mef," "The Glide," "Everything," "Presidential MC"), they're mostly limited to the ones that are Wu-affiliated, either through guest spots or RZA/Mathematics production. Do I need a track with Fat Joe and Styles P on it? I sure don't. Am I embarrassed to own a song called "Let's Ride" (featuring Ginuwine)? You're goddamn right I am.

And that's becoming the tradeoff with modern rap music. While there used to be one R&B song on a hip hop album (and it sometimes wouldn't even suck), now there's four. Or five. Or half the fucking thing. And it ends up souring me on the whole deal. Meth drops some great lyrics on this record, but I just can't stop thinking about "4 Ever," the song that closes this record. It's a love song that samples a well-known 80's pop song, and it's flat-out terrible.

It's a shame. But I'll still buy Method Man's next record. Because I love to hear the dude rap. How screwy is that?

Oh, I forgot to mention: The track "4:20" is, like the album, stupidly titled, but it features Streetlife and Carlton Fisk and aside from the lame hook, it's dope.

"Problem"
Posted by Wockenfuss at 1:29 AM

I, like you, I think initially really liked this one because it didn't totally suck. This was also during a time when the majority of Wu-related releases were pretty suspect so I was just happy to have a few decent songs to listen to. It always bothered me that he openly badmouthed "Tical 0" for being too commercial, openly claimed that this album was to answer his critics, and basically made many of the same mistakes that marred "Tical 0." Crappy R&B? It's here. Mandatory major rapper guest spots? They're also here. A random, sad appeal to people who would never listen to Method Man? It's here. What's up with that beat to "Fall Out?" And its not the label bossing him around because he performed the whole thing when I saw him live. Whatever. "The Glide" is still a gnarly song.