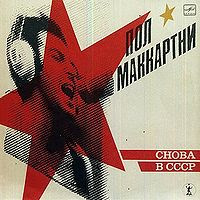 I picked this record up sometime in the last year, and now I can't remember why. It must have been cheap. This is an initially Russian-only LP that eventually found a U.S. release. I have the Russian version, which is pretty sweet. Though I don't think it's rare or anything. Still, the print is all in Russian, so that's kind of cool.

Anyway, it's just Paul doing a bunch of golden oldies, and I think I've listened to it once. I'm all for artists getting back to their roots, I just don't usually enjoy the results. When you've got such a great songwriter, it's only natural to want to hear them do their own shit. Of course, I'm far from the ideal audience for a record like this.

Still, nice to have. And the songs are fun.

"Don't Get Around Much Anymore"
Posted by Wockenfuss at 1:39 AM

I have two major beefs with this record. The first is that the production is terrible. Everything sounds empty and messy all at once. The second is that McCartney really phones in the performances. Rather than a vibe of fun and upbeat (seeing as how these are songs he totally digs) the whole thing feels slow, lazy and overproduced (there's those two words again). It's odd that both he and Lennon found a way to make fun songs seem tiresome (see Lennon's "Rock N Roll"). Still, having the Russian copy is pretty sweet.