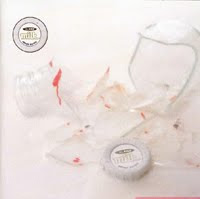 This is such a weird album.

In '95 or '96, a friend of mine gave this to me, saying he found it cheap at a used record store. Had I heard it? Nope. Did I know that it had a track with King Ad Rock from the Beastie Boys on it? Nope. But I'd love to hear it. The song was called "Spam," and it quickly became one of my favorite mix tape tunes for the late 90's. Lots of people got subjected to "Spam" via my cassette mixes. And they liked it. Fat beat, nonsense lyrics, and Ad Rock just going nuts. I had no idea who this Milk dude was, and as much as I tried to like the rest of the album, it didn't get to me as much as "Spam."

Part of that is due to the setup of this CD, which brings us back to why this record is weird. There are nine tracks. One is an intro that is seventeen seconds long, another is a remix of a tune that is on the album. So, there's really only seven songs. The whole thing is only 26 minutes long, and it goes by quick. It's actually the sort of spazzy, senseless hip hop that I enjoy, but you never really get an idea of what this dude is about. The liner notes suck, I never met anybody who had even heard of him, and he was never heard from again.

Of course, now with the power of the ol' internet it's easy to find out who Milk is, and the story's not even that interesting. But I still find this CD interesting. So I'll be holding onto it until I find the LP, thank you.

"Spam" is a pretty unbeatable tune.