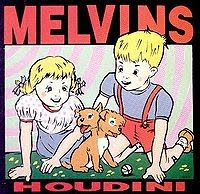 My Melvins collection is sadly lacking in quantity. It's a damn shame, but somehow, collecting the Melvins stuff on vinyl is an expensive undertaking. I have yet to venture down that path. I'd like to pay $100 for a copy of Lysol, I just haven't been able to bring myself to do it yet. You understand.

One of the albums I do have is this one, the band's major label debut. First off, it's hilarious that the Melvins ever got signed to Atlantic records, and even funnier that the label ended up putting out more than one of their albums. Ah, the early 90's. You know as soon as Kurt Cobain listed the Melvins as his favorite band, the label dudes were falling all over themselves to meet up with Buzz and Dale. I wonder what they thought when they actually heard the band.

As far as the Melvins go, this album is crazy accessible. But I think it's safe to say that none of these tracks ever got anywhere near the radio. Though it's wonderful to consider that "Night Goat" got released as a single. A great song, but it wasn't exactly "Black Hole Sun." But, in Melvins' terms, it kind of is. There's like, a chorus and shit!

Seriously though, this album rules. Don't get too caught up in the Kurt Cobain co-production credits, or the fact that he dicks around on guitar on one of the tracks. This is all about King Buzzo showing all he's got to offer, blazing through quickies like "Honey Bucket" and "Copache," and dragging out sludgers "Hag Me" and "Joan of Arc" like only he can. And while they're at it, why not give the drummer some? I think that's what's happening on the ten-minute "Spread Eagle Beagle," but I've never been sure.

It's not like the Melvins were going to make an album that was completely easy to handle. "Spread Eagle Beagle" is a challenge, and so are a few of the others. "Pearl Bomb" uses what sounds like a CD skipping as the percussion track; "Set Me Straight" frustratingly ends as soon as you feel like it's picking up steam.

The most easy-on-the ears jams here are the first three: "Hooch," "Night Goat," and "Lizzy." Tracks like "Lizzy" show up on a lot of Melvins records. Buzz seems to always toss in one melodically coherent cut, just to let you know that he is capable of writing semi-normal rock songs - he's just doesn't have much interest in it.

You gotta be careful which Melvins albums you buy (unless you're an extremely patient and forgiving person), but this one's a safe bet.

Also - I saw the Melvins when they toured for this record. This is about what it was like. That first drum part went on for at least 15 minutes. The crowd was fairly thin by the end.

I too find it hilarious that a major label actually signed and supported the Melvins. I can't believe that you didn't hit on their cover of Kiss' "Goin Blind," which is genius and maybe the most accessible thing they had ever done to this point. You also left out my other favorite on here, "Honey Bucket." Now that is pure Melvins kickassery.

I remember reading an interview with Buzzo during this period and they asked him about "Spread Eagle Beagle." It is totally a Dale Crover drum solo. When they were in the studio they decided that it needed something more so they simply slowed down the original 5 minute solo to make it a 10-minute epic. Ah, the Melvins.

My Melvins LP collection is doing quite well, thanks. I have a near mint copy of "Bullhead," the complete solo trilogy (which is missing the Crover poster unfortunately), and "Honky," which is mint due to the fact that it has very little replay value.