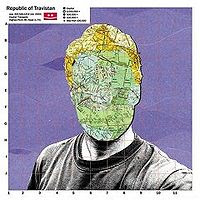 I was never a hardcore-obsessed Dismemberment Plan, but I was definitely into the group. I was bummed when they broke up, but definitely not as devastated as some. Still, I was looking forward to frontman Travis Morrison's first post-Plan album.

I've spent five years with this album, and I still don't know what to make of it. Between the four "Get Me Off This Coin" interludes and the general busyness of the tunes, I've just never been able to latch onto this thing. I don't hate it; far from it, in fact. And I don't mind that it sounds nothing like Dismemberment Plan. It just didn't ever hit me the way the last Plan album did. Strangely enough, the first post-interlude track on this album shares the same name as the final Dismemberment Plan album ("Change"), and is the only song that sounds remotely similar to Morrison's previous band. After that, it's an experimental pop free-for-all that toggles between trying too hard and phoning it in.

Part of my problem is that I can't get past the four "Get Me Off This Coin" sections on this record, especially when I remember that there's only 13 proper tracks on this thing, not counting the hidden cut, "Represent," which should have been left off. So they just feel like space-taker-uppers, and they suck anyway.

Pitchfork made it cool to hate this record, but they were just being extra-pissy that day. I'd rather listen to this than Fuck Buttons or most of the other skinny/greasy bands they're humming on the nuts of. In fact, listening to this now, I'm wondering if I don't come back to it enough.

It's just so fucking weird. I have to prepare myself for it.

Listen to a few cuts here.
Posted by Wockenfuss at 3:15 AM