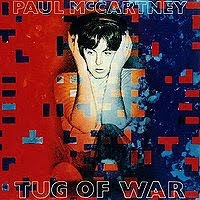 Compared to the lo-fi starkness of McCartney II, this record sounds slick as heck. And it really is. But more importantly, it's McCartney's first real post-Wings statement, and it finds him rushing into the 80's with some serious ambition.

Listening to it now, it sounds a bit overly polished and perhaps blatantly striving for radio play, but it's also an interesting window into where Paul was at during the time. The duets with Stevie Wonder (the lengthy funk of "What's That You're Doing?" and the hammy feel-gooder "Ebony and Ivory") are both a bit much for me, but it's definitely cool to hear these two bigwigs teamed up with each other. But before either of those, the title track shows us just how massive in scope McCartney's ideas were. The song is layered to the gills with strings, smooth backup vocals, and intricate arrangements. It flows seamlessly into the catchy-as-shit "Take it Away," which Paul must have known would be a huge hit. It's very 80's, and not my favorite single of his, but it's a big song.

"Here Today," McCartney's tribute to the recently-deceased John Lennon, is a moving song, both uplifting and terribly tragic. It's "Eleanor Rigby"-ish in its structure, and strangely short. Hard to know how to feel about that one.

The second side of the album is less mainstream poppy, and the mix of songs makes for some nice stylistic diversity. The duet with Carl Perkins isn't really my cup of tea, and "Dress Me Up as a Robber" is a little too slick and slinky for me, but "The Pound is Sinking" and "Wanderlust" are both pretty nice.

This was the beginning of McCartney in the Eighties, and people certainly dug it. But man, "Ebony and Ivory" still just sounds like such a stinker to me. Eh. If he wanted radio play, he got it. So that's something.

This was actually the first solo McCartney record I ever bought. It never quite sold me then and still doesn't now. "Here Today," "Take It Away," and "Dress Me Up As A Robber" are the really the only standout songs, and even then, compared to the rest of his work, I would only say that they are pretty good. Too much of it comes off as lazy and overproduced, two words that characterize most of his 80s output (except for "Pipes Of Peace," which is oddly strong). If I never hear "Ebony And Ivory" again I will be ecstatic.