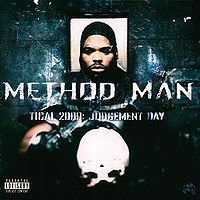 Is it "judgment" or "judgement"? Can we get a ruling on that? I was pretty sure there was no "E" in that shit. Anyway.

In the four years between Method Man's first two solo albums, a lot happened. The Wu was huge when Tical dropped, but by the time this one came out, they were massive. Wu-Tang Forever had just been released, and the country was enamored with the Clan. So, what to do? How about try to make a star of Method Man? I remember seeing something on MTV saying that the video for "Judgement Day" was the second-most expensive video ever made at that point. Now, we have to remember that the world was all wrapped up in Y2K fever at the time, but I still thought it was a bold move to spend millions on a post-apocalyptic mini-film of Meth dicking around in Mad Max outfits. Still, I thought it was pretty dope.

Turns out the elaborate (and arguably overdone) video was all too representative of the album itself. When this bad boy dropped and I saw that it had 28 tracks on it - yet wasn't a double album - I feared the worst: they let Meth run loose. And they did. You know how many actual songs are on this record? 17, by my count. Counting the intro, there are 11 skits or interlude-type-things on this record. And they all suck. What it equals is an LP that fucks itself by being majorly bloated. It's 74 minutes long, which is too long. And, again, the skits. A phone message from Donald Trump? I can't imagine who could possibly give a fuck about that.

The biggest bummer? In between all this crap, there's a bunch of pretty darn good songs. There's also some stinkers, but I can always come back to the title track, as well as a bunch of other ones. "Torture" is one of my favorite Method Man songs ever. You know why? Because the beat is sweet and Method Man just straight-up raps. And it is awesome.

Other highlights: "Suspect Chin Music," "Dangerous Grounds," "Snuffed Out" - basically any of the songs that Streetlife is on. And "Sweet Love," which should suck, but Cappadonna is so hilarious on it that it ends up ruling.

My advice. Put this disc in iTunes, pare it down to the bare essentials, and you'll have a solid little record. Throw those skits in the trash.

Funny thing: it was kind of agreed that this album wasn't great when it came out. Thanks to the even shittier albums that Meth dropped after this one, it's ended up aging pretty well.

Lord knows I tried really hard to LOVE this album. I wanted to really bad. The skits are super annoying (I had the cassette) and altogether the whole thing just seems like no one ever told him no. That being said, almost every song here is at least decent ("Break Ups 2 Make Ups" is pretty lame) and there is something to be said for a dense, albeit awkward Meth release from when he was on top of his game. I pretty much agree with your analysis of the tunes and always noticed that Meth ups his game whenever Streetlife is on the track (something he always does on Wu-Tang songs as well). iTunes really helps one to make sense of this album and finally allows me to enjoy it as it should have been released: a really long, lyric heavy effort from one of the greatest MCs ever.

Oh, and by my count there are 19 actual songs. Although he annoyingly labeled them skits, I consider some of the shorter songs ("Shaolin What," "Snuffed Out," etc) to be actual songs. I'm just saying.