Special Report: RIP Whereheezity - Another Sign of the Times. 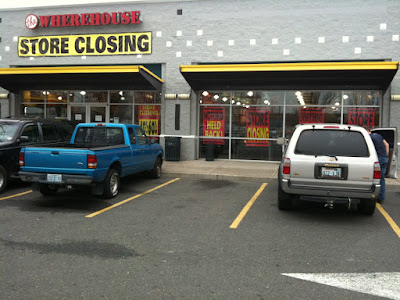 The Wherehouse in the Clackamas Promenade briefly turned into an FYE a few years back, and then closed shortly after that. This was the store that my brother worked at for a long time, and the same one where I pulled holiday shifts for a few years. Honestly, I was sad to see it go. The Wherehouse was never the most reliable place to find the music I liked, but I lucked into some good shit there over the years. And I felt quite comfortable in the Clackamas store. Some good times were had there. I wasn't shocked to see that it had closed, but I was disappointed. One less good place to go when I'm in that neck of the woods.

I sort of assumed that the Eastport store would be quick to follow, but it continued on, and I continued to shop (and sell CDs) there. The writing was on the wall, but I chose to ignore it. They were paying me a little too much for my used CDs, and the store seemed to be getting rearranged every month. One day I went in and they just weren't selling video games anymore. The CD stock dwindled, and the DVD stock expanded. That was fine by me; I mostly bought movies there anyway.

But all this inconsistency pointed to a company struggling to stay afloat in the crappy music business times we live in. I guess maybe I knew I was enjoying it while I still could.

I spent a good amount of time in there today, shopping hard through what was left of the store. It was depressing. The walls were bare, and the store was in even more disarray than it usually is. Of course, the 40% off all remaining merchandise made the whole thing tolerable. I was able to score some last-minute extra Christmas gifts for the wife (at those prices, I couldn't resist), and grabbed some shit for myself that I couldn't pass up. Things were picked through, but there was still plenty of deals to be had. I have no idea when the sale started, but by the amount of people who were there at 11AM and the amount of stuff that was left, I'd say it hadn't been going long.

I asked the girl at the counter when the store was actually closing, and she said they "had to be out by January 31st," but that if they sold as much as they felt they could, they might just pack up the rest and mail it to an FYE store.

I'm going to miss that place. I liked the nerds who worked there, and it was a great place to get used DVDs. Now I'm stuck with...what? Everyday Music and CD/Game Exchange? Meh. Everyday Music's DVD sections are clusterfucks, and I hate everyone who works at the CD/Game Exchange that's closest to my house. Fucking bros.

Anyway, if there's a high-ticket item you haven't wanted to pay full price for, now's the time. Get down there, get a sweet deal, and pay your respects.
Posted by Wockenfuss at 2:14 AM

This makes me sad beyond words. I had a great year working at this place (before working at the Clackamas store for about 4) and still knew some of the fine folks that worked there. Although it was a corporate record store I still always enjoyed working/shopping at Wherehouse. They had an amazing amount of good stuff at fair prices (used, not new of course). I hope my friends who are still there land on their feet.

"Knew some of the fine folks that worked there"...although there may have been a rare few that passed through who were genuine-hearted folks, most of the "lifers" were lazy underachievers who needed this nudge in the right direction to get them moved on beyond their cliques and get something resembling more of a real job. I'm sure some of the other FYE dumps would take some of them in like stray dogs and use them up until those stores closed, which is inevitable.