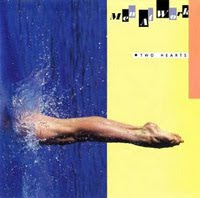 The forgotten Men at Work album.

Made after a couple of dudes left the band and sounding unlike their previous two, this one is a sweet oddity in the short Men at Work catalog. I was pretty excited the first time I saw this, especially when I opened it up and realized there were only three guys left in the band. Ah, the pre-breakup, contractual obligation LP. Of course, the cover is gatefold, way more elaborate than their first two, and much more "80's" than those, as well. So is the music.

While the first two Men at Work records were nicely produced, this one borders on slick-as-fuck, with more audible synths and way smoother guitar tones. If they were trying for a radio hit, they didn't get it. But they did crank out some decent songs. "The Man with Two Hearts" and "Maria" almost sound like hits. But cuts like "Children on Parade" and "Hard Luck Story" sound phoned in.

The presence of other vocalist Greg Ham, who had sang on other albums, is way more jarring here. Every track he sings is synth-dependent, almost too much so. Hay's songs sound pretty much in the same style as his earlier ones. So, yes, this sounds like a typical record from a band about to fall apart. Two completely different sounds coming from two completely different dudes. Should have let Hay handle it, boys.

I love this record for what it is, but it's clearly their weakest work. Still, great to have and great to play every once in a while.