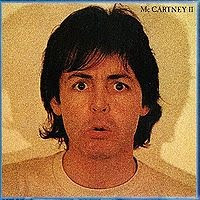 What the hell was Paul McCartney doing between 1971 and 1980? Oh yeah... Wings. Well, when he was done dicking around with those jokers, he went into his home studio and started dicking around with a new-fangled synthesizer. Seems he didn't initially intend on releasing the results, but we should be damn glad he did. McCartney II is a really unique record, and a damn fine one as well.

Maybe I just like the idea of Paul playing all the instruments himself, or maybe I like the idea of him releasing his home recordings. Either way, this is one of my favorite McCartney solo records. Maybe my absolute favorite. "Coming Up" is...how would you describe it? Stoned disco? The falsetto is both hilarious and awesome, and so are Paul's muffly vocals in the verses. Listen to this track in headphones for the full effect. There's a lot of peripheral shit going on, and it's worth dissecting a little bit.

"Temporary Secretary" is my favorite track on this LP, mostly because it's just so un-McCartney and so fucking weird in general. I could see how it would get on some folk's nerves, but the drum machines and sequenced blips, combined with Paul's nasally vocals - it's just too good. Things take a big detour from there, with the lo-fi blues of "On the Way" and the underrated loveliness of "Waterfalls." Sure, it's a little corny, but that's where Paul shines. (And when I say "underrated," I mean in the context of the guy's whole career. It's a well-liked song, just not as much as some of his other ones.) "Nobody Knows" closes out the second side with some blues-shakin', and the heavy drums and distorted vocals make it work nicely.

Side Two is where shit gets mad fiddly, with "Front Parlour" sounding like Paul's just trying out his new synth toy and seeing what works. "Summer's Day Song" is fake strings and layered vocals, and though it's not as huge as it might like to be, it's cool. The unfortunately titled "Frozen Jap" sounds strangely like an instrumental version of "Girls Just Wanna Have Fun," and the hand claps are pretty damn funny. "Bogey Music" is a bizarre electronic boogie that, again, features Paul really tweaking the knobs. "Darkroom" is another blippy number, and must have endlessly amused a stoned McCartney.

The record closes on a more standard note, with the timid balladry of "One of These Days," which, even though it sounds like a slightly souped-up demo, is really a nice little song. McCartney isn't really known for being an experimental dude, but the stuff he does here makes me wish he would have done more.

This is by far McCartney's most stripped down and seemingly half-finished album. I believe him when he says he wasn't planning on releasing much of this. "Coming Up" and "Temporary Secretary" pack a sweet 1-2 punch and the rest of the album sounds like an indie rock record released in 1999. And "Girls Just Wanna Have Fun" should have to pay royalties for biting "Frozen Jap."