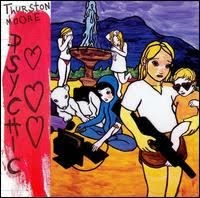 I was all about Sonic Youth in the mid-90's, so when this solo album from their main dude came out, I copped that shit as soon as I could find a used copy on cassette. It took a while, but it was worth it. And as you can see, I've since replaced it with a CD copy.

Stupid thing I did: I found this on vinyl at Crossroads here in Portland a few months back (on colored vinyl, no less - I think green...?) and I didn't buy it. They were asking like 40 bucks for it and I just couldn't do it. Of course now I wish I had it, but I also think that wasn't a great deal. Whatever. My time will come.

Anyway, I think I first found out about this record via the "Ono Soul" video, which is a great clip and a great song. It basically sounded like the more stripped-down Sonic Youth stuff ("Winner's Blues," etc.), and I liked it. And Steve Shelley was on drums, so that wasn't a bad thing. (Does it seem weird to anyone else when someone goes solo and then takes certain members from their band with them? Must hurt the ones who get left out. Or maybe it doesn't.) Of course, this album doesn't sound unlike Sonic Youth, but it's much more sparse and much more ramshackle-y. And I dig it.

"Ono Soul" is probably the most immediately catchy tune, but cuts like "Patti Smith Math Scratch" and the title track are mad infectious as well. I also consider "Feathers" a favorite. It sounds like a leftover from the Experimental Jet Set album that Sonic Youth had just released. In fact, this whole record has that same whispery-distorted vocal thing that that record had, and I think it works pretty darn well.

It wouldn't be right if things didn't disintegrate into madness at the end, so the album wraps up with the five-minute weirdness of "Female Cop" and the almost twenty-minute "Elegy for All the Dead Rock Stars," which is definitely worth listening to if you've got some time on your hands.

All in all, an overlooked album. And a really good one.

I don't think I have given this one enough spins. I rock it from time to time but it never quite sticks with me. I think I always listen to it on the tale end of a Sonic Youth binge and I need to give it its own private time. I for one have no patience for the final track. "Ono Soul" is pretty unbeatable though. One of the first songs I ever figured out on guitar.