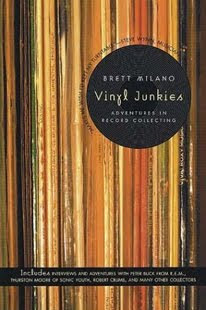 As an avid record collector, I always look forward to hearing the tales of those who share my passion/affliction. I also enjoy finding out about folks who are way more obsessive about this "hobby" than I am. It makes me feel better about the time and money I spend on my records. I go to record shows here and there (I'm gearing up to go to the Eugene Record Convention at the end of this month, in fact), and there is never any shortage of dudes who are clearly more involved in record collecting than I am. It's like any addiction: if it's getting in the way of you living your day-to-day life, you might have a problem.

While I've definitely made some purchases that might have been slightly ill-advised (or to the untrained eye, completely pointless), I don't think I'm in dangerous territory yet. Taking my wife to see the movie Vinyl was a good move: she now understands that there are people out there who are literally ruining their lives over the pursuit of records. Me? I just like 'em. And while my collecting is probably more intense now than it has been at any other point in my life, I've impressed myself recently by backing away from some tempting eBay auctions and leaving some records, even though I wanted them, sitting right where I found them in the bins at the record store.

So, as you can see, like any delusional addict, I have my legitimization for what I do. It's flawed at times, but like watching Vinyl, this book made me feel like not only do I not have a real obsession with record collecting, but that I should maybe not even consider myself a real collector.

There's the story of the guy who mailed two grand (in cash!) to a guy in Brussels he corresponded with on the internet, who claimed to have a rare Tony Jackson 10" that he had been searching for for years. The letter containing the money ended up being seized by the Belgian government and the dough disappeared. Ouch.

There are tales of dudes whose collections number into the tens of thousands; so big that they either have them in storage or literally can barely move around their house. To put that in perspective, I'm almost halfway through (alphabetically, at least) my collection (including CDs) on this blog, and we're not even to 500 yet. I have two shelves of vinyl that are each the length of an LP wide and about six feet tall. If we guess that I have about 500 LPs (and that might be generous), the guy in the book who boasted 20,000 has forty times as many records as I do. And my LPs take up a nice little chunk of wall space. A guy like that needs like two bedrooms stacked floor to ceiling.

So, yes. I like reading about dudes like that. Actually seeing the collection (like in Vinyl) makes it hit home a little bit more, but this book did a good job of detailing the living situations of some of the obsessed. The author also talked to Thurston Moore and a few other musicians (one of the guys from the J. Geils Band has a huge collection), who had some interesting perspectives on the record collecting game. Robert Crumb is also interviewed, and that dude's so hardcore he only collects 78s.

I blazed through this book in about two days, which was a bummer. For such a vast subject, it seems like it could have been a lot longer. I could have used more nerdery and more details, even though there was plenty. So, that was probably my one complaint. If you've got any interest in record collecting, this is definitely worth a quick read. But be warned: it might get you fired up to go digging through some bins. Be careful out there.
Posted by Wockenfuss at 1:29 AM

This book sounds awesome. I can't believe you read it so fast. I love hearing about people who are way bigger nerds than me.