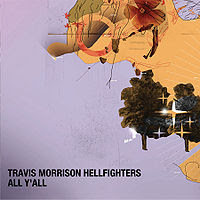 My confusion with Travistan didn't prevent me from buying the shit out of Travis Morrison's follow-up as soon as it came out, and I'm glad I did. This is the album I expected Travistan to be: not exactly like Dismemberment Plan, but an exploration of the themes that were bubbling to the surface on their last album. This record isn't exactly that, but the guitars and the double-tracked hooks are back, and they sound pretty damn sweet.

Dismemberment Plan was an acquired taste for me, and this album has been, too. I still feel like I don't know it super well, and I still hear new shit when I listen to it. The lyrics on some of the songs are lacking a bit, but what the hey. The bizarre melodies are there, and the sounds are layered without feeling chaotic. Morrison's vocals sound urgent again, and the songs are slightly complex, but mostly straightforward.

I dig it. Morrison has always struck me as a weird guy trying to act normal, and if this album feels awkward and uncomfortable in spots, that's why. But his best songs have always been like that.

If you like the Dismemberment Plan and haven't picked this up yet, you're missing out. It won't blow your mind, but it'll make you move a little bit. And that's fine.

"You Make Me Feel Like a Freak"
Posted by Wockenfuss at 1:47 AM