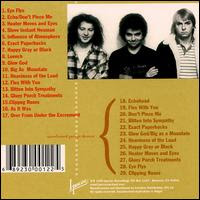 This is the 1999 reissue of the Melvins' first album, and I'll tell you: if you are a Melvins fanboy, this is a must-own. Not only does it contain all the lo-fi glory of the actual album, but it also includes "garage demos" of a bunch of the songs. The sound quality is horrible in both cases, but it's incredibly horrible on the demos. Again, the Melvins test your patience. This is actually a pretty tame example.

Anyway, this is (almost) the beginning of the band, and for what it is, it's a great record. I actually haven't listened to this in years, so I don't know how much I'll have to say about it. The sludge you would expect is here, and though the recording is shit, the band still manages to sound powerful. Dale Crover, as always, sounds like he's trying to splinter his drums, and it's great fun to listen to.

This was when Matt Lukin (later of Mudhoney) was still in the band, and though the bass player in the Melvins has never been the focus, it's nice to know he's there. The strange thing, Melvins-wise, about this album, is that none of the songs (aside from the perfect opener, "Eye Flys") is particularly long. In fact, the majority of 'em are quite short. And some are even fast in spots. Yeah, they were still finding their niche.

If you enjoy the demos on this CD, you are officially a Melvins nerd. Congratulations.

"Happy Gray or Black"
Posted by Wockenfuss at 1:56 AM

I used to have "Gluey Porch Treatments" on a dubbed cassette (making it impossible to tell one song from the other) so this CD sounds incredible to what I used to sit through. While the demos are rough, I love them just from a pure curiosity standpoint. I can't even believe that they exist. "Gluey Porch Treatments" is impressive in how reliable it is. It moves so quick and there are so many interesting things happening that I rarely ever tire of it. And it's hilarious hearing them rip through songs.