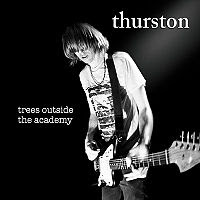 From the get-go, this album is much more palatable than his first, which makes me almost like it less, but that's just the cool guy in me. If nothing else, this record (released twelve years after his first solo record, with no others in between) is a testament to how far Thurston's come with both his songwriting and his production tendencies.

"Frozen GTR," the first track, has what sounds like strings on it. Yowsa. And it has backup vocals. What is this, a grown up Thurston Moore? Kind of. These tracks are more deliberate and more meticulous than the songs on his first solo record, but the shit Sonic Youth does now sounds much more mature than the stuff they were doing in '95, too. And you know what? Both eras are completely awesome for completely different reasons. In fact, I really like this album, because it's completely different than anything he's ever done. Not drastically so, but just hearing him use acoustic guitars for more than just a novelty appearance is great. And when a guy's made as much music as Thurston Moore has, it's really cool to hear him still find a new way to work things.

In the end, I probably don't like this one as much as his first one, but that also might be because I haven't spent as much time with it. I rocked this steady when I first got it, but then I must have become distracted. That can happen. And why I didn't buy this on LP, I don't know. They put out a sweet picture disc of this thing, and I guess I just didn't know about it or didn't look for it. I am a rube.

I really like this album. I have certainly listened to it a lot more than his previous solo disc. It's like a jangly Sonic Youth, which should be terrible but isn't. "Frozen GTR and "Fri/End" are my jams.