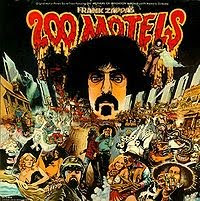 The soundtrack to 200 Motels is almost as confusing as the movie. The songs don't follow the order in which they appear in the film, the incidental music (the orchestral stuff) is mixed in with the rock stuff, and some of it includes dialogue from the film, which sounds like it was recorded directly from the film itself.

So, the recording quality varies throughout the album, which is a little distracting, and any plot devices that were used in the film are pretty much lost on the soundtrack. In some ways, it makes a perfect companion to the film. You can't follow it, there are slow parts throughout, and unless you're really paying attention (and know some stuff going into it), you most likely won't be able to make any sense of it.

This is easily The Mothers album I have heard the least, so I can't say a whole lot about the intricacies of it, but there are some great Flo & Eddie-led jams on here. Like the movie, and like the Fillmore LP, the songs are mostly based on life on the road, specifically about groupies and sex. The lyrics are sometimes dirty, often juvenile, and some focus on back-and-forth exchanges between Flo & Eddie, who play caricatures of themselves and others. If this sounds like a busy collection of songs, it is. It's a long, haphazard group of tracks, but overall, a good album.

The orchestral tunes are what they are: well-recorded pieces of Zappa's music, performed by the Royal Philharmonic Orchestra. If that's your thing, you'll love the stuff in that format presented here. The Mothers stuff often sounds like slightly better-than-average bootleg recordings, which doesn't deter too much from the overall effect of the songs. In fact, it mostly works, considering the subject of the songs. Cuts like "Mystery Roach" and "Shove it Right In" are some of the more rocking songs The Mothers of this era would produce, and "She Painted Her Face" contains a really powerful melody.

There could be a little more rock here, in my opinion, but if you have the patience to plow through the entirety of this thing, you'll get some serious satisfaction out of it. And if you can find a decent copy of the LP, it's a great-looking one. Gatefold cover, and if you're lucky, the original booklet that was included with original pressings. It's sort of a weird 200 Motels storybook. Of course, it doesn't make much sense, either, but the pictures are nice.

"Mystery Roach"
Posted by Wockenfuss at 1:26 AM