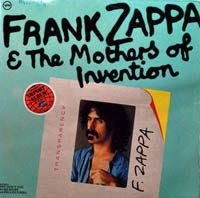 Sometimes referred to as Transparency, this is yet another Mothers compilation put together by Verve, without any input from Zappa. I'm fairly certain this was the last one to come out, because by this point, even the second version of the Mothers had disbanded. (Though Zappa would still sporadically use the name for a while. More on that when we get to the Z's.)

Like the other ones, there's not a whole lot worth mentioning here unless you're an obsessive nerd, so let's get into it. First off, this LP contains both "Big Leg Emma" and "Why Don't You Do Me Right" (often also seen as "Why Don'tcha Do Me Right?"), two songs that were released as a single in 1967, but wouldn't see an official album release until 1995, when they would inexplicably be plopped right in the middle of Absolutely Free. (If you own Absolutely Free and it's in your iTunes, do yourself a favor and move those songs to the end. It fucks up the flow of the album as it was intended to be heard.) So, those would have been cool to have at this point if you didn't have a copy of the original 7".

There's also a cut called "Excerpt from Lumpy Gravy - The Abnuceals Emuukha Electric Symphony Orchestra & Chorus," which is the chunk of Lumpy Gravy that includes "Dog Breath," if I'm not mistaken. So that's a unique edit, which is interesting.

Other than that, there's 19 other tracks, and by my count, 12 of them are from We're Only in It for the Money. Of course, they're from the highly censored version of the LP, so they sound weird to me. They'd sound weird to you if you're used to listening to the CD version of the album. So, "flower power sucks" and "I'll love the police as they kick the shit out of me on the street" are missing, but a line about the Velvet Underground that is not (if I recall correctly) on recent reissues is in there. Odd.

Yet another comp that Zappa snobs turn up their noses at, and yet another one that I own the shit out of. If nothing else, it's fun for the mini-bio on the back where they refer to Jimmy Carl Black as "Jim Black."

Funny how everybody seems to slag this compilation off. This Verve compilation series (including this Zappa one) included such groups as : The Pink Fairies, Medicine Head, Rory Gallager, Taste, etc. Loads of people at my school had some, or all of these albums, and I discovered much great music via these LPs, and of course went on to buy some original albums later of these artists. In fact I had a copy (bought second hand at the time) ofFreak Out which is what inspired me to buy this Verve compilation. I still listen to it from time to time (and why not), but of course also went onto Live at the Roxy and Elsewhere and the likes, but this compilation wet my appetite for discovering more from the Mothers.

So, don't knock it, maybe it served it's purpose somehow!