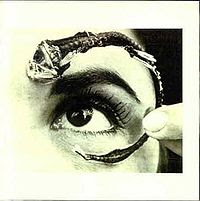 The four years between Mr. Bungle releases seemed like an eternity. It got to the point where I had almost given up hope, and then there it was, listed on the "upcoming releases" board at my local record store. Or at least I think that's how I found about it. Somehow I knew it was coming out, because I bought it the day it was released. And I was excited. Giddy, even.

Oh, wait! I know what happened. My roommate at the time worked at the University of Oregon campus radio station, and they received a promo copy of what was to be the first single from the record, "Desert Search for Techno Allah." I remember sitting in the studio, mashing a pair of headphones against my ears, and hearing the song for the first time. While I wasn't exactly expecting a sequel to their debut, it definitely took me a minute to process. The chorus is "Qiyamat qiyamat a tawil'/Qiyamat qiyamat insan al kamel," which just confused the shit out of me. Still does.

So, I had heard that song, and knew they were taking things in a different direction. When I bought the CD, I ran home, put it in, heard the first minute of "Everyone I Went to High School With is Dead," and realized they were taking things in a completely different direction. My friends and I spent the next month listening to Disco Volante, probably annoying everyone with it, while also learning to love it. Or at least most of it.

This is Mr. Bungle's most difficult album (by far), and one that, like Faith No More's Angel Dust, completely destroyed the foundations upon which the band was built. It frustrated me at first, but after I spent hours, days, and months with it, it made perfect sense. I don't know exactly what I'm talking about, but Mr. Bungle has always struck me as a band that is constantly moving forward, and probably gets sick of their old shit quicker than most bands. And instead of easing into a new sound, especially after four years, they clearly felt the need to completely redefine themselves. It worked.

And while this album is highly experimental and crazy tedious in sections, there's still plenty of great vocal parts, great musical performances, and a handful of tracks that certainly qualify as actual "songs." Of course, there's also tracks that toe the line, like "Violenza Domestica" and "Phlegmatics," and "The Bends," which is the closest they've ever come to making an unlistenable song. You made your point, guys.

One of my all-time favorite Bungle tracks is the one that closes this album out, the messy mind-warp that is "Merry Go Bye Bye." It's bashing, blaring noise, sandwiched between some of the lightest, most beautiful melodies that the band ever put together. And the lyrics have always been some of my favorites. Observe:

I somehow scored an original copy of this LP in a record store some years back, and though it's got a promo notch in it and it's missing the bonus 7" that was originally included, I still treasure it. Apparently there's a hidden track in a "double groove" on it somewhere, but I've never been able to get it to work.

"Chemical Marriage"
Posted by Wockenfuss at 2:06 AM

I'll never forget buying this the day it came out. I made my girlfriend at the time drive me to the record store so I could buy it. When we got back in the car I immediately put the tape in, assuring her that it would be awesome. And then "Everyone I Went To High School With Is Dead" came on. She was not impressed. I'll admit that at first I wasn't too thrilled with "Disco Volante." But as time went on I found myself listening to it non-stop and it grew on me to the point where I love it like few albums. Seeing them pull the songs off live on that tour seemed to only make me love the album more. Scummy's chinstrap beard that traveled all the way up his shaved head will forever be burned into my skull. He also put on a virtuoso performance the night we saw them, rocking the guitar and keyboard simultaneously. As for the album, it is an awkward second album if there ever was one. The artwork is way too elaborate and the songs are almost a forced attempt to alienate the majority of their fan base. That being said, for me "Desert Search For Techno Allah," "Carry Stress In The Jaw," "After School Special," and "Merry Go Bye Bye" are all insane songs. The drummer in me wants to make out with "Carry Stress In The Jaw" in particular. As for the hidden song in the groove, it's supposed to be part II of "Carry Stress In The Jaw," the Grampa Simpson part. That move, pre-internet? See: awkward second album.