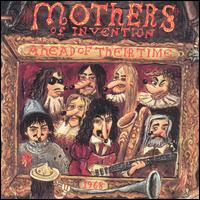 This is probably about as close as you'll come to getting an idea of what a Mothers of Invention show would have been like in their heyday. Recorded on October 25, 1968, this album is a must for any serious Mothers of Invention fan. For those of you who consider yourselves fans but aren't as serious about it, I'd suggest you start at track 11.

Tracks 1-10 represent a short play/musical that Zappa would later call Progress?, a loose story about some of the Mothers quitting to form their own splinter groups and the trouble they encounter along the way. There's music mixed in with the semi-improvised dialogue, but it's all fairly abstract stuff that is meant to (I'm assuming) evoke the feelings of the characters in the bit. I find it quite interesting, but that's because I can tell who everyone is. There's also short film clips of this performance in a few Zappa movies, so I don't have any trouble picturing it. But that's me: I'm a cool, cool guy.

Really though, the point I'm trying to make is that if you don't at least kind of understand what's going on, it won't be of much interest to you. I usually view it as a long intro to the musical section that makes up the second half, which is where things really get moving. So, in that fashion, it's a nice warm-up.

Track 11 is a rousing, eight-minute version of "King Kong," where the band, who had been holding back for the duration of Progress? finally gets to let loose. It's an incredible jam, ending with warbling feedback and click-clacky percussion that segues right into an amended, minute-and-a-half version of "Help, I'm A Rock." I'm pretty sure that's the last track with vocals on the album.

From there, it's on to "Transylvania Boogie," which runs right into a wacky version of "Pound for a Brown" that twists and turns all over the place (as that song tends to do). Zappa's guitar solo on it is muffled and relegated to the near background, but it's fantastic nonetheless. That moves right into short, tight, peppy instrumental versions of "Sleeping in a Jar," "Let's Make the Water Turn Black," and "Harry, You're a Beast," which are melded together and pulled off seamlessly.

The album wraps up with two sections of "The Orange County Lumber Truck," one very short and right before "Oh No" (which is sandwiched in between the two), and one ten-minute-plus section that beats the show into submission and ends it poignantly. Parts of that song (and that specific performance), I believe, appeared on Weasels Ripped My Flesh but in a different version.

This CD is one of my most recent Mothers purchases, and I can't stop listening to it. The second half of it, as long as you're OK with the lack of vocals, is practically untouchable. In the liner notes, Zappa calls it a "fair" performance (this was one of the last Zappa-related albums released before his death), but he'd never admit that it was great. I'll admit it: it's great.

Can't find any audio for this specific album, but here are The Mothers of Invention in 1968