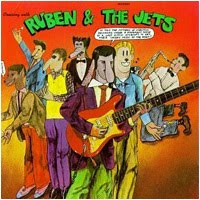 1968 was a big year for Zappa and the Mothers. After We're Only in It for the Money, Zappa put out his first solo album, the wacky-fun Lumpy Gravy, and then got back with the Mothers to drop this LP, a full-on doo-wop album that is either brilliantly satirical or completely serious. I've never been able to tell which.

While Freak Out! had its share of doo-wop tunes, most of them were fashioned with snarky lyrics that could hardly be misinterpreted. While there's a little of that here, it's toned down considerably, making it unclear whether or not this is just a tribute album to the style of music that Zappa loved so much growing up. In the end, it doesn't matter. This is simply a great little record, a collection of tunes that mostly feature Ray Collins on lead vocals and sound like they're straight from a malt shop. I know it sounds like an odd idea - and it is - but it's strangely enjoyable.

Three tracks from Freak Out! ("How Could I Be Such a Fool?," "You Didn't Try to Call Me," and "Any Way the Wind Blows") get reworked here, and though the lyrics remain the same, the feel and tempos of the songs change considerably in each case. It's a cool idea, mostly because they're so different in their newer versions.

This album is one of the ones that's a sore spot for Zappa fans, because before it was released on CD, Zappa had some dudes do overdubs on some of the songs he wasn't happy with. Of course, this was like twenty years later, so it's completely obvious where the new tracks are. I'm pretty sure it's never been released in its original form on CD. My advice: stop being such a sniveler and buy the original LP. That's how it was supposed to be heard in the first place, you sissies.

And it's a sweet gatefold number with fun shit on the inside. Yeah, my copy's NM. Eh, maybe EX+.