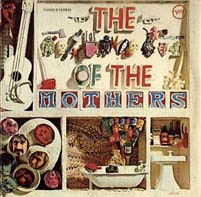 The Mothers started out on the Verve record label, but beginning with Uncle Meat, they moved to Bizarre, which was a sub-label of Reprise that (from what I understand) was created just for Zappa. Previously, I spoke about Mothermania and how it was the only Mothers compilation approved and compiled by Zappa himself.

Apparently Verve still wanted to capitalize on the success of The Mothers, so they released this compilation after the band went to their new label. As I said, a lot of Zappa fans consider a record like this fairly worthless, as it contains no new material, wasn't released with the band's permission, and basically comes off as a cash-grab. I agree with those sentiments, but I like to own the damn thing anyway. It's got interesting cover art, and after all, it is technically a Mothers album, so the completist in me demands that I have it.

Do I ever listen to it? Nope. But I like to see it sitting there. It features cuts from their first three records, with the only interesting anomaly being that of the three-part "Call Any Vegetable" trilogy (discussed in the previous Mothermania post), it includes only the second two parts, which effectively omits the basis for the conclusion. So, that's a bit odd, but not really that interesting.

I still consider it a solid part of my Mothers collection, though. It's a good-looking record.

"Concentration Moon"
Posted by Wockenfuss at 1:25 AM