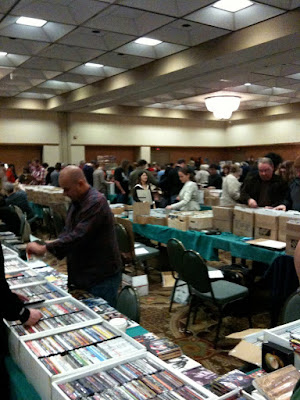 I went to the Eugene Record Convention the last year I lived down there, which would have been 1998. I had a great time, picked up some great vinyl, and vowed to come back. But then I moved 100 miles north and promptly forgot about it. I planned to attend last year, but financial restrictions squashed the deal. I made it a priority this year, and today - armed with a decent amount of cash, my trusty record-carryin' bag, and a completely disinterested but highly tolerant wife - hit the road at around 10AM and arrived at the Eugene Hilton around noon. After running into a few friends on the way in (whattup Jeremy and Robi!), I snaked through the hallways of the plush hotel, said goodbye to the wife (she was considering coming in, but after sneaking a peak at the scene inside thought better of it), paid my three bucks, and entered.

The scene was just as I remembered it from 12 years ago: a big conference room, bright and hot, packed to the gills with dudes swarmed around tables. Yep, this was a record show. I made my way around all the tables, giving the place a good once-over. Nothing caught my eye, so I started back at the beginning, at the table of a guy who's always at the Night Owl record shows and who (I think) also has a section at Crossroads Records. Dude's good for two things, always: Zappa and Beatles. I was holding off on Beatles stuff today unless something really presented itself, so after talking Zappa with him for a little bit (he has both original Mothers of Invention singles, the bastard), I picked up a few records and proceeded to make my way around the other tables.

I eventually combed through everything I wanted to, and it took me about two hours. I couldn't believe it, but I really didn't end up buying that much stuff. I didn't know whether to be proud of myself for not blowing a bunch of money, or disappointed in the record show for not having a ton of stuff I wanted to buy. I passed on a few things I wanted (I'll get to that), but here's what I did get:

Frank Zappa - Shut Up 'n Play Yer Guitar: 3-LP box set, UK pressing on EMI with the Barking Pumpkin logo also on the back. Not the rarest FZ record, but it is rare to see it anywhere but the internet. Really happy about this one.

Frank Zappa - Zappa in New York: Double LP, German import, clean as a whistle. I don't know how long I've been putting off buying this record. Happy with this copy, because it's kind of a weird one. Discreet label, but doesn't look exactly like the American ones.

Teen Angels - Daddy: Girl group from the mid-90's, on Sub Pop. Eddie Spaghetti from the Supersuckers wrote the last track and plays guitar on it. I have never figured out his connection to this band, but as a Supersuckers nerd, I must own it. I have the CD and wanted to replace it. Dude gave me this for free for buying the two Zappa records. Perfect, because it's not in great shape.

Sonic Youth - A Thousand Leaves: Not a tough record to find, but rarely seen used. Ten bucks? I'll take it.

Old Skull - Get Outta School: This was one of my random purchases for the day. Pre-teen punk rock that I haven't heard in 20 years. Couldn't pass it up for four bucks.

Prince Markie Dee - Love Daddy: When I found out, years ago, that Markie Dee from the Fat Boys had a solo record out, I told my brother - who was working at the Wherehouse at the time - to look out for it. The CD was somehow impossible to find, even though it retailed for like a dollar. I proceeded to forget about it, until today. Now I'm the proud owner of the LP. It looks terrible. But it was cheap.

They Might Be Giants - They Might Be Giants: When I was living in Eugene, I came across a copy of this record, didn't buy it, went back for it, and of course it was gone. Haven't seen it in a store since. And it has haunted me. Found a great copy of it today, with the original lyric sheet intact. Really happy about this one.

The New Pornographers - Electric Version: A dealer was knocking prices down as he was getting ready to pack up shop, and I ended up getting this for almost half of what he had it marked. Great album, good deal. Another step towards replacing my CDs with vinyl.

Built to Spill - You in Reverse: Again, another one that's not hard to find, but I got a solid used copy. I don't even know if I've heard this record.

I passed up on a few things: There was a copy of Sonic Youth's Experimental Jet Set, Trash, and No Star on blue vinyl that I wanted, but the $45 price tag was a bit excessive. There was also a copy of Helloween's Keeper of the Seven Keys, Part 1 that I had my eye on, but the vinyl was jacked up. I can get a good copy from eBay.

This was the weird one: This guy was selling - just filed in with all his other records, mind you - a butcher cover copy of The Beatles' Yesterday and Today. It was a peeled one (third state?), was completely split in two, and it didn't have the record in it. He wanted fifty bucks. This old dude was looking over my shoulder and talking to me while I was looking at it. I needed to gather my thoughts, so I put it back and walked away. I went back to look at it again, and the old dude had purchased it. I think I was wise to walk away, but I'm not sure. It would have been cool to have, but I'd almost rather save a bit more money and get one, you know, that actually has the record in it. But part of me still feels like I dropped the ball. It just seemed to me that if it was some crazy great deal, why hadn't someone bought it yet? I'm overthinking it.

Anyway. After the show we went to House of Records, which was my favorite record store in Eugene when I lived there. I bought a D-Nice 12" and was just happy to see that the place was still going: 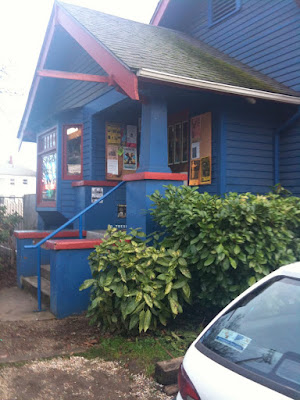 I got some fliers for some other record shows coming up soon, but now I don't know where I put them. I'll be going. I realized I enjoy looking as much as I do buying.
Posted by Wockenfuss at 1:01 AM