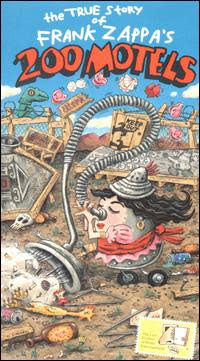 You've watched the film version of 200 Motels at least ten times, and you've spent hours, headphones-clad, listening to the original motion picture soundtrack. What's left for a 200 Motels junkie like yourself? Why, the making-of documentary, of course. Yes, that's right. You heard right. An hour-long documentary on the trials and tribulations of one of the weirdest films ever to be released.

Zappa put this little movie together himself, and I have to say: it might be more entertaining than the actual film it documents. There's behind-the-scenes footage, interviews with members of the band, some bonus live performances, and best of all, some of Zappa's own home movies from 1970. Yep, FZ just kickin' around his house with his wife and a few of his kids. It's pretty awesome.

Narration is done on-screen, with Zappa providing informational asides through written bits superimposed over whatever's happening. Usually these give insight into how the person talking fucked up the movie or otherwise prevented things from being easy in one way or another. There is also a current (at the time) interview with Zappa where he provides further information on the technical aspects of the film and the hoops they had to jump through to get it made.

It's not a traditional documentary, but at an hour long, it makes for a great companion piece to the film. The biggest bummer of 200 Motels is revealed here, which is even more troubling when you consider how much more awesome this documentary could have been: The producers of the movie, after it was done, took all the film used to shoot the movie and erased it. So all the scenes that didn't make the final cut, and all the random shit that got shot over the week of filming was lost forever. And they recouped four grand on a movie they were paying over $675,000 to make.

Pretty weak. But Zappa found the guy who made his own documentary about the making of the film (for a news station or something), got a hold of his footage, and re-edited it and made his own movie out of it. And that's basically what this is. It's impossible to find (and of course hasn't been released on DVD), but if you have any desire to see it, you can watch about the first forty minutes of it
here
here
here
and here.
Posted by Wockenfuss at 1:38 AM