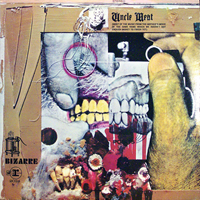 This album will always bring one hilarious personal memory to mind for me. While talking to my friend Nate one night, the subject of what record he likes to put on while he's making love to a lady came up. He didn't even hesitate: "Uncle Meat by The Mothers." This is not funny to you. But if you knew Nate and you knew Uncle Meat... Just trust me. It's the best answer ever.

Like the movie - but not to such a crippling degree - the soundtrack to Uncle Meat takes patience. But once you let it into your brain (and your heart - awww), there is no going back. I have never listened to Uncle Meat while physically romancing a lady, but I'll tell you what: it's a great road trip record, a great record to clean the house to, and a great record to just put on and stare at the ceiling to. It's everything that was ever great about the Mothers in one hour-plus package (actually, I think the CD is much longer than that): jaunty instrumentals, random dialogue, unidentifiable sound effects, incredibly catchy songs, and bootleg-quality live recordings that threaten to negate the whole thing until you realize how brilliantly they fit into the scope of the album.

This is a record that demands to be listened to beginning to end. If you don't find something to love in track 3, the six-minute abstractness that is "Nine Types of Industrial Pollution," then this might not be for you. But if you find it intriguing - even if you're not sure why - stick with it. Play the rest of the album and let it suck you in.

Witness the beauty of the pepped-up doo-wop in "Dog Breath, in the Year of the Plague." Try to get "Sleeping in a Jar" out of your head, even though it's less than a minute long. It will haunt you. And when you've finally made it through all six parts of "King Kong," you will be a convert. Or maybe you'll have hated it. I don't know. But the first time I heard this record, I couldn't wait to hear it again. And I still listen to it more than probably any other Mothers album. I think.

This is also one of my favorite Mothers albums, art-wise. Sweet gatefold cover, incredibly strange artwork inside and out, and a 12-page booklet that contains the actual Uncle Meat story, as Zappa envisioned it. It makes little sense, too, but a bit more than the movie.

I recommend the shit out of this album.