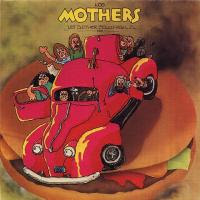 Recorded a few months after the Fillmore East - June 1971 LP, this is the other big Flo & Eddie-era live album released by The Mothers, and due to an unfortunate injury sustained by Zappa shortly thereafter, it would be the last. But it's a great one to go out on.

If you didn't like the Fillmore LP, you probably won't like this one. But if you did, you'll love this oddball grouping of five tracks. The groupie stories are gone, and they've been replaced with a random variety of songs. The entire first side of the LP is devoted to "Billy the Mountain," the 25-minute rock-opera-ish giant that I still don't quite understand. I think I used to, but it's been a while. My roommate in college loved the song, but he didn't even fuck around with this version. He went straight for the unedited, thirty-minute-plus version from 1993's Playground Psychotics. (Don't worry - we're getting to that.) I've heard "Billy the Mountain" a hundred times, but it's been a decade since I really gave it a go.

But I still like it. It's stop-and-go, with short bits of song interspersed with the dialogue from Flo & Eddie. And when the band is allowed to let loose a little bit, the grooves can get going. So that's nice.

The second side of the record starts with an updated, more rocking version of "Call Any Vegetable," which adds some new sections and ends up being an almost completely different song. Pretty damn fun. After that, it's the falsetto majesty of "Eddie, Are You Kidding?," which I always thought had something to do with Eddie of Flo & Eddie, but I guess it's about some guy who was on TV at the time. Regardless, it's a nice little pop number, and one of the shorter songs on the record.

"Magdalena" is a peppy, slightly dirty number that starts off sort of shitty but ends up going through a series of twists and turns and ends up being pretty entertaining. "Dog Breath," which appears in different versions on a bunch of Zappa records, winds things up here. And it remains one of my favorite Mothers songs. The version here is different than all the others, and Flo & Eddie just nail it. It's great.

Put this record together with the Fillmore LP, and you've got yourself a solid representation of what The Mothers were all about during the first few years of the 70's. And if you can tell the difference between Flo & Eddie's voices, consider yourself a true aficionado.

"Call Any Vegetable"
Posted by Wockenfuss at 1:38 AM