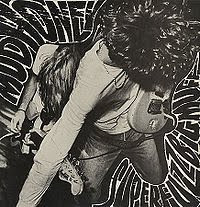 It isn't hard to love Mudhoney. They've got a knack for writing catchy tunes, they have a great sense of humor, and they always struck me as really nice guys. Or at least really fun guys. Apparently that's all it takes for me to really enjoy a band. Or at least it's been enough when it comes to these guys.

I still have my cassette of Superfuzz Bigmuff Plus Early Singles, which was a big part of my introduction to the band. I can't remember exactly when I first heard them, but I know that tape was the first thing I owned by them. They've since put out a deluxe version that expands on that album and looks incredible, but I've decided that I want to get some of the original copies before I give in and buy that.

I already have a decent copy of the "Touch Me I'm Sick" 7" (Second Edition, blue vinyl), so this was my next order of business. I just purchased this record a few weeks ago, and it is a great one to have. Vintage Sub Pop. The copy I got is a first pressing on black vinyl, with the shrink still intact, and a Sub Pop singles club form still in it. Unfortunately, the poster that was originally included is not there, which sucks. But, I'm happy to have an original regardless.

It's impressive how much they've managed to expand this thing over the years. The deluxe version has 32 tracks; this has six. But they're a solid six, and they really represent the roots of the band. Mudhoney often get written off as jokers, but these guys knew how to put a song together. And while they would do nothing but get better as the years went on, this is really an impressive start.

"Need" shows, right off the bat, what this band's strength is: Mark Arm's vocals. Nobody sounds like Arm, and I'm not sure that anyone would want to. His voice wailing over the mega-fuzzy guitar parts is something that cannot be emulated. "Need" is, by all outward appearances, a sincere song, and a compelling one at that. Arm has no trouble sounding strained. "Chain the Door" contains the classic line, "You make me feel like a big dumb loser," which instantly made me favor this band when I was fifteen. They had distilled my existence, and I was more than happy to let them speak for me.

Mudhoney had a great way of evening out their more raucous songs with slow, swelling ones, and that exactly what "Mudride" does at the end of side 1. At almost six minutes, it's a long journey. But it's great to hear where the song begins and where it ends up.

"No One Has" is a sinister rocker, and probably my favorite song on this record. It's another tail of utter despair, and once again, Mark Arm just makes it. A great, great song. Many years ago, "If I Think" was just the kind of shattered love song my teenage self needed, and I was happy to have it. I still am. It's got a great loud/quiet, fast/slow thing going on.

"In 'N' Out of Grace" is the epic Mudhoney song, and there could be no better way to close out this record. Explaining the song would take a long time, so I'm not going to do it. But it sounds unlike anything Mudhoney would ever do again, so I'm glad they did it. There's hints of classic rock, blasts of punk, and just some crazy, crazy guitar playing. This was the song we all went nuts for when we were teenagers. It has screaming, swearing, and an overall fuck-the-world approach. I would highly recommend it to any troubled youth.

In fact, I would recommend Mudhoney to any troubled youth. They'll help you through the hard times.

It's funny, I always think of this album as including the singles since your cassette had both. That being said, these 6 songs will always remind me of being a young man discovering "alternative" music. Even better? They lived in the NW like me. And their music sounded like the NW. That sounds corny but I think it makes sense. Certain bands have a way of sounding like their surroundings and I think Mudhoney always captured the NW thing perfectly. While some of their stuff sounds dated to me now I know for a fact I thought it was the bees knees back in 1992. "If I Think" was always a wonderful, non-corny chick song, a rare find for a cool guy like me.