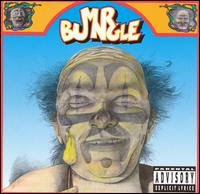 When you talk about albums that shaped my teenage years (which I'm sure you often do), you can't not bring this one up. And while it definitely sounds a little dated now, it still brings back so many memories for me.

Faith No More hit it big in 1989/1990, and my friends, my brother and I were big fans. I'm not sure when we first found out about the existence of Mr. Bungle. Mike Patton wore a Bungle shirt in the "Epic" video, so that might have been the tip-off. Or maybe they were mentioned in a magazine article. Either way, we were aware of them, but had never heard them.

(As always, remember that this was pre-internet. You had to work - or wait - to hear the music you wanted, and it made the whole experience much more fulfilling. You kids today have no respect for music, and you're systematically killing it. Congratulations. But I digress.)

Then, one day, as I was flipping through the newest issue of Spin magazine, I saw it: a quarter-page ad for the forthcoming Mr. Bungle album. It had (from what I can recall - I've just spent the last 15 minutes searching for it on the web with no luck) a picture of the album cover, along with jokey text about some of the subject matter, and an admission that they couldn't reveal who the singer was because of a contractual obligation. The ad was for an album to be released on Warner Bros. and FNM were signed to Slash. Bingo.

I showed the ad to my younger brother when I got home, and we proceeded to get very anxious. This band was real. Mike Patton was clearly in it. And they looked to be weird as all get-out. We couldn't wait. I don't remember if the album was already out, or if we had to wait a few weeks for it to actually be released, but at some point shortly thereafter, my brother bought the cassette. I remember the first time we listened to it. We put it in, prepared ourselves for "Travolta," and stood back. Nothing. Then, after at least 30 seconds, something shatters like a bottle being broken on the ground and, because we had the volume cranked up in an attempt to hear the music that wasn't there yet, the guitars that open up the record blared through the speakers. Mission accomplished, Mr. Bungle. You scared the shit out of us.

It's little things like that, mixed in with all the mind-blowing songs, that make this record what it is: both incredibly brilliant and also pranky and borderline annoying. And we couldn't get enough of it. These guys played brilliantly, made music like nothing we'd ever heard before, and didn't seem to give a fuck about anything. At one point (during the end of "Slowly Growing Deaf"), there is what appears to be a recording of someone taking a monster dump. As a teenager, this amused me to no end. Eh, it still does.

There are ten songs on this album, and the shortest one clocks in at 5:14. The longest is 10:40. They are all meticulously written, arranged, and recorded. The lyrics are juvenile but the melodies are intricate and astounding. Classifying the music is impossible. Wikipedia calls it "experimental rock/avant-garde metal," but that might only be half of it, especially when you consider how much their sound changed over the years. But we'll get to that. For now, we're talking about this one. And I'm going to have to break it down song-by-song so I don't miss anything.

"Travolta," later to be known as "Quote Unquote" is, like I said, the album's opener, and it's a monster of a song. It is actually about John Travolta, and it's not complimentary. This was the only song that saw a video release from this album, though it never got any airplay. I never saw it until the internet came along. Key lyric: "He's a bird in flight, a hermaphrodite/And he fucks himself as he fucks the world."

"Slowly Growing Deaf" is a loud/quiet, fast/slow beast, a song that seems to be about the band's disdain for playing live, or maybe their hatred for shitty bands. I've never been sure which. This was an early favorite of mine when I first started listening to this album. Key lyric: "Wax within my ears has grown/Just like the snot inside my nose."

"Squeeze Me Macaroni" is a crazy funk-ish number that features Patton half-rapping and going completely nuts. The lite-pop payoff at the end is one of the greatest things ever. Key lyric: "I got yogurt meat loaf smeared all over my ass."

"Carousel" always struck me as the most radio-friendly song on the whole record, and it's also the shortest. It sounds like circus music, and features a great chorus. Like most songs on this record, it is best enjoyed through headphones. A lot going on here. Key lyric: "The clown that painted a smile on you/Is now the one unmasking you."

"Egg" is seven minutes of abstract metal/ska ridiculousness, followed by three minutes of what sounds like a recording of some dudes walking around. It is awesome. Key lyric: "The flooded cyst drains itself of pus/The lonely stomach chills unless it's drunk."

"Stubb (A Dub)" was always one of my favorite songs on this record, and it still is. The lyrics (which seem to be about a dog named Stubb A Dub) are actually sentimental if you want them to be, and the song has a breakdown that just gets me every time. Key lyric: "It's time to wipe your butt/Sliding down butt hill."

"My Ass is on Fire" is, surprisingly, the most lyrically abstract song on the record, though I've always suspected it's just about an old dude with hemorrhoids. It's probably my least favorite song on the album, but I still like it. Key lyric: "Impotence/Boomerang/I'll stab you."

"Dead Goon" is the most musically abstract song on the album, and a perfect one to end on. It's complex, stacked with layers of sound, and sort of summarizes everything that preceded it. If you are a champ, you will sit through the whole thing. Key lyric: "Sex? There's no such thing/Choices left me laughing, choking, laughing."

I used to have this album on limited edition picture vinyl. Then I got poor and sold it. I got a bunch of money for it, but I miss it. I'm working on getting another copy. It's one of my major record-collecting regrets. But I'll always have the music, and that's something. Right?

That's so funny. I can't believe that you remember all of those little details just like I do. I totally remember that ad in Spin and just being so excited that I couldn't contain myself. I have probably never anticipated an album so much (it's right up there with Faith No More's "Angel Dust" and Unwound's "Leaves Turn Inside You) as this one. I mean, at that point, Faith No More was my life. They were THE band for me and I was Patton crazy. I vividly remember talking Dad into going to the store with me to buy it (back in the days when stores cared about parental advisory labels) and remember standing at the counter with it in my hands. Everything fascinated me on the ride home. The artwork was so deep and intricate that I didn't know where to begin. The lyrics were LONG and had big words that I would later decipher. I also remember the anticipation of putting it in the stereo and having to wait for the music to come on. I know this album better than almost any other as I listened to it pretty much non-stop. The level of filth in the music was perfect for my teenage ears and the album is so deep that it rarely gets old. "Squeeze Me Macaroni" hasn't aged well but lord knows I loved it at the time. As I've gotten older my love of "Girls of Porn" has somewhat faded, although it is still a pretty great tune. I, like you, bet they regretted ever putting that song out as idiots would always call for it at concerts. For my money, it doesn't get any better than "Stubb (A Dub)," "Carousel," "Slowly Growing Deaf" and "Love Is A Fist." Watching them play the latter live on Youtube makes me want to cry. This album will eternally remind me of middle school, which is interesting for me and probably noone else. "Dead Goon" always reminds me of laying on the beach in Ocean City, NJ with my walkman on. Crazy. Sweet track by track review by the way.