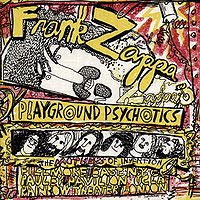 Ready to get hardcore?

Playground Psychotics is not for the casual Mothers fan. The vitals: 57 tracks, clocking in at 132 minutes. The majority of the tracks are hand-held-recorded audio tape snippets of the band between shows. On the bus. In the hotels. Backstage. Talking. The version of "Billy the Mountain" on this collection is the unedited one. It is over a half an hour long. Just look at the back cover of this thing. Scared? You should be.

The good news: Thanks to technology (and by that, I mean iTunes), you can pare this thing down to a great little live album, one that supplements both Fillmore East - June 1971 and Just Another Band from L.A. quite well. Yes, this is Flo & Eddie-era Mothers, back for one more crack at it. If you're a huge fan of this version of the Mothers, this collection will give you a crazy boner. If you're not, this will do nothing to change your opinion. But I have to say, some of the best second-version-of-the-Mothers stuff resides in these discs. I'll break that down in a bit. First, I have to tell you how this sprawling set is designed to be listened to.

Set up like a sort-of audio documentary, the album is sequenced thusly: Tracks 1-11 on Disc 1 are "A Typical Day On the Road, Part 1." These are audio bits of the band traveling, trying to coordinate a photo shoot, getting to the hotel, etc. This stuff will bore you to tears if you don't know who these people are. If you do, it's quite interesting. Once or twice.

Tracks 12-21 are a mix of live recordings from the '70-'71 tours, a nice mix of noisy experimental stuff ("Zanti Serenade," "Don't Eat There," "Super Grease") and more traditional songs, some of which might be familiar ("Sleeping in a Jar," "Sharleena," "Cruising for Burgers"). The recordings are great, and all the songs are played really well. It's all made to sound like one big show, but I know there's substantial editing throughout the whole thing.

Tracks 22-26 were recorded during the same shows as the Fillmore LP, but weren't released (by Zappa, at least) until this album came out. They feature (and this has always been so weird to me) John Lennon and Yoko Ono, and are some of the most surreal recordings of the Mothers I've ever heard. The band does five songs with Lennon on guitar and vocals, and Yoko on vocals as well. "Well" is a blues number that John says he "used to play in the Cavern in Liverpool" but hasn't played in a long time. Yoko yelps along in the background, and after a few verses, Lennon screams "Zappa!" and FZ busts loose with an incredible guitar solo. It's great.

"Say Please" is about a minute of everyone screeching at what I'm assuming is Zappa's commands, because they're quite tight. "Aaawk" is Zappa and Lennon jamming while Yoko warbles and screeches. "Scumbag," which is easily the highlight here, is a rambling rock number that just repeats the title of the song over and over. There's some vocal improv, but it's really the instruments that get a workout. It's a terrific song. It's followed by the aptly named "A Small Eternity With Yoko Ono," which is basically six minutes of Yoko cry-singing over feedback. Good luck with that one. Still - historic recording? Methinks so.

Tracks 1-10 on Disc 2 comprise "A Typical Day On the Road, Part 2." It's more of the band rambling, and it's occasionally funny. Tracks 11-19 are more live tracks (interspersed with a few talking spots), and they're the best part of this whole set. The band runs through "Status Back Baby," "Concentration Moon," and "Mom & Dad," before launching into the mega-mad rock operatics of "Billy the Mountain." I think I said it before, but attempting to explain "Billy the Mountain" is impossible. My ex-roommate who used to drunkenly sing along to the entire 30 minutes of it on a nightly basis could probably break it down for you, but I've never been able to wrap my head around it.

Disc 2 wraps up with 12 tracks collected as "The True Story of 200 Motels," which isn't much more than audio taken from the film of the same name. Phew. It's a lot to listen to, folks. But take out the talking and some of the more questionable tracks (I'm looking at you, Yoko), and you've got yourself some great Mothers live shit. Seriously. Flo & Eddie doing "Mom & Dad" is actually a little bit moving.

The Mothers and Lennon at the Fillmore - (site might be NSFW)
Posted by Wockenfuss at 1:12 AM

When I was 18 or 19 I was ready for a new Zappa album. Armed with with some cash I asked a close friend, who was a big Zappa fan, what album I should get. He told me this. So I bought it. On cassette. Needless to say, he could not have given me worse advice. What would possess someone to recommend this as the 4th or 5th Zappa album to own? The talking is not trump tight. Gutsy call kicking off the album with poorly recorded conversations. Worst music buying advice I have ever received. I'm surprised he didn't tell me to buy "Metal Music" next.