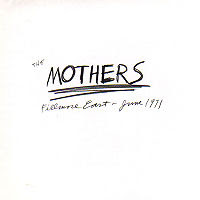 As I said, Zappa disbanded the original Mothers of Invention around 1969. However, he kept Ian Underwood (wind instrument dude) and Don Preston (keyboardist and pure stallion) around for the band's next incarnation, which would mostly be referred to as, simply, The Mothers. This is the first record that left off the "of Invention" and it's also the first record to feature what some refer to as the "Vaudeville" Mothers. I never refer to them as that. I refer to this period as "The Flo & Eddie Years."

I'm not going to go into the whole story of Flo & Eddie (really Mark Volman and Howard Kaylan, respectively), but if you want a quick synopsis, you can check out their Wikipedia article. Bascially, they were the dudes from The Turtles. And for the short time that they were with Zappa and the newly formed Mothers, they were Zappa's mouthpieces, performing songs/skits and generally hamming it up. Some people love this era of The Mothers, others struggle with it. I, sometimes against my better judgment, love it. I got into the Flo & Eddie shit before I even turned twenty, and I think I was smoking enough pot that it all made sense to me. Now I've just got a soft spot for the whole damn thing.

Don't get me wrong: I still prefer the original Mothers of Invention, but I like this a lot, too. And in a different way. But I understand why folks wouldn't. There's a lot of talking. Seriously. A lot.

At this point in his career, Zappa was certifiably obsessed with showing the world his interpretation of the life of a touring rock band. It's really all that this album and 200 Motels (the film and the album - both of which we'll get to) are about. And, like I said, this era of The Mothers is very lyric-heavy. And, considerably and consistently dirtier than anything Zappa had done up to this point. Does it feel a little juvenile at certain points? Definitely. Are there some great songs mixed in with the performance dialogue? Yes. So, I've always felt that if you have the patience for this record, it really pays off.

Yes, "Do You Like My New Car" is basically seven minutes of Flo & Eddie talking over a slow groove. But, the four songs that follow it (and conclude the album) are full-on fantastic. They even throw an amended cover of "Happy Together" in there, and it somehow works. There are some slow cuts (if you don't like hearing Flo & Eddie talk) during the beginning-middle of the LP, but "Latex Solar Beef" and "Willie the Pimp" are tough to beat.

This album, like a lot of Zappa's stuff, takes patience. But wait until we get to Playground Psychotics. It's from this same era, is three times as long, and features backstage conversations between band members. Fillmore East seems like an EP compared to that thing. But that one will have to wait. But not too long.

Anyway. There is a time and a place for this record. If you can find it, there's some serious enjoyment to be had here. I firmly believe that.

Not from this actual album, but a live recording from the same era.
Posted by Wockenfuss at 1:20 AM