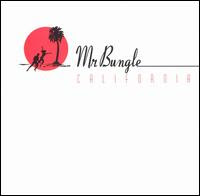 Again, Mr. Bungle made us wait four years for a new album, and again it was completely different than the one that preceded it. In fact, it was completely different than both of the albums that preceded it. The biggest surprise was that this album was almost - and I can't believe I'm saying this - accessible. Now, keep in mind, that's completely relative. But I remember being shocked that I might be able to put a Mr. Bungle song on a mixtape for a girl and she might actually like it (I'm looking at you, "Vanity Fair").

As usual, it didn't matter what Mr. Bungle did or didn't do. The songs are incredible, and this album stands up easily with their other two. And on the plus side, there's less dicking around just for the sake of dicking around. Instead, this thing is completely packed with music. While Disco Volante was frustratingly short on lead vocals from Mike Patton, on this album he goes nuts. On "Ars Moriendi," he barely clams up during the entire thing, and it's incredible.

We always thought every Mr. Bungle album would the their last (same thing with Faith No More - Patton must be a bitch to work with), so when this dropped and it was clear they hadn't phoned it in, I couldn't have asked for more. While it was clear this album was a contract-fulfiller (the packaging is minimal and cost-effective), it never comes off as one. The songs are, in typical Bungle fashion, incredibly complicated and also insanely infectious. "None of Them Knew They Were Robots" blew my skull open the first time I heard it, and it continues to do so. Same with "The Air-Conditioned Nightmare." And if there's a better song title than "Golem II: The Bionic Vapour Boy," I'd like to hear it.

My brother and I saw Mr. Bungle in San Francisco on New Year's Eve 1999, and it was an incredible experience. I talked about a little in this post, and if you want to see how awesome it was, you can check out a clip here. Wow, that was over ten years ago. Yikes. Anyway, it was shortly after this album was released, and seeing them play these songs live was incredible. I was never real keen on the California theme, but whatever. I always loved the shit out of this record, and I still do.

And I've always been glad I got to see them live before they hung it all up. This album in particular has held up really well. Cop it.

"Pink Cigarette"
Posted by Wockenfuss at 1:56 AM

I don't recall why, but it actually took me awhile to get really into this album. I don't think I was heavy into Patton anymore when this came out and I think I was actually somewhat let down by how "accessible" it was. Once I stopped being an idiotic 20 year old, I quickly came to love this album, although I will confess I never obsessed over it like I did the other two (I would wager that not being a teenager and a lack of lyrics both aided in this fact). Seeing them play the majority of this material on New Year's Eve of '99 is one of my favorite memories from being a young man. Best 50 bucks I ever spent. Pretty much every song on this album is wonderful, with "The Holy Filament" maybe being the only one that is non-mixtape worthy. "Vanity Fair," "Pink Cigarette" and "Sweet Charity" are almost too good, where they leave you feeling like that song must have already existed somewhere. My personal faves have got to be "None Of Them Knew They Were Robots" and "Retrovertigo," which are both example of Bungle at their best. Seeing them play both of those live (both in San Francisco and Portland) was a powerful experience.