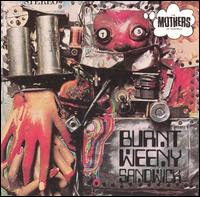 Zappa disbanded the original Mothers of Invention in 1969, but still had enough unreleased material left over for a few additional albums. This is the first, a nine-track collection of mostly instrumental songs that capture the Mothers at arguably their tightest and most ambitious.

The album is bookended by two doo-wop-ish cover tunes, "WPLJ" (by the Four Deuces), and "Valarie" (by Jackie and the Starlites). It wasn't often that Zappa would whip out a cover song, but these two fit extremely well within the framework of the previous homages The Mothers made to the early genre of rock.

The remainder of the album consists of abstract instrumentals, ranging from the under-a-minute horn-blowing of "Igor's Boogie, Phase One" and "Igor's Boogie, Phase Two," to the impressively sprawling blues and jazz-tinged madness of the eighteen minute-plus "Little House I Used to Live In." In the end, it all basically blends into one big piece of music, and it's another Mothers album that is intimidating at first, but heavily rewarding once you realize what it entails and what you can expect.

"Holiday in Berlin, Full Blown" runs through complex arrangements for its first half, then turns into a distinctly-Zappa guitar solo towards the end. "Aybe Sea" is a sparse, piano-based number that ends up being one of the most beautiful songs The Mothers ever recorded. But, really, it's all about "Little House I Used to Live In." The song takes so many twists and turns that you can get lost in it. In a good way.

Another album that's probably not a good place to start with The Mothers, but a great place to go to if you're in the mood for some of their more complex (and well-recorded) early instrumentals. I like this one a lot.