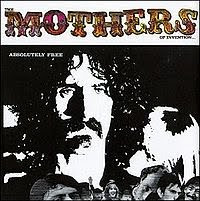 I have said, on occasion, that The Mothers are my favorite band ever. At times, I have certainly felt like that. When I'm engulfed in the genius of an album like Absolutely Free, it's hard for me to imagine anything better. This record is top-notch Mothers, a collection of songs that perfectly bridge the gap between the album that preceded it and the one that would follow.

Absolutely Free is more straight-up nutty (lyrically, at least) than the Mothers' debut, with tracks like "Call Any Vegetable" and "Duke of Prunes" being some of the major tunes here. Though, wonderfully, it's often hard to tell where one song ends and one begins on this album. They all blend together in what Zappa called "mini-suites" (one on each side), movements that incorporate smaller elements of songs that all work together to form one semi-cohesive song. These songs often shoot off into sprawling instrumental sections (with "Invocation & Ritual Dance of the Young Pumpkin" easily being the biggest one), but the record is tight and lean compared to Freak Out!

And I love it. This is one of my favorite Mothers albums, and though I say that about almost all of them, I really do have a fondness for this one. It just gets going and doesn't stop, except when you have to flip the record over. And the variation of styles and complexity here are nuts. The addition of Bunk Gardner on sax, the irrepressible Don Preston on keys, and the beefy Billy Mundi on percussion couldn't have hurt. The Mothers sound wide on this album, and they also sound rehearsed and well-oiled. "Brown Shoes Don't Make It" is a feat unto itself.

Man, seriously. Just listen to The Mothers' albums in order. You'll thank me. Because you need this perspective for what comes next. Well, not exactly. But it helps.

"Call Any Vegetable"
Posted by Wockenfuss at 1:18 AM

I dig this album but I feel like it falls a little short of the brilliance of "Freak Out" and "We're Only In It For The Money." I'm not saying it's not good but I have never felt like it was great. I am probably wrong and this is certainly the one of those three that I have heard the least. Still, it certainly works well as a bridge between albums one and three and has some great songs. Personally, I really enjoy "America Drinks And Goes Home," "Status Back Baby," "Son Of Suzy Creamcheese," and the fantastic "Big Leg Emma."