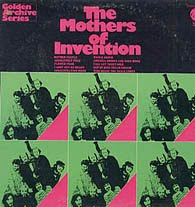 Possibly also known as Golden Archive Series, this is another unauthorized Mothers compilation that consists of previously released material from their first three records.

While this is another comp that is poo-pooed by Zappa purists, it is slightly notable for a few reasons. While it doesn't contain any unreleased material, it does contain strange edits of a few tracks, which is a bit amusing.

"Mother People," the first track on the LP, starts from the second verse, and then contains a small portion of the beginning of "The Chrome-Plated Megaphone of Destiny," the song that originally followed it on We're Only in It for the Money. "Who Needs the Peace Corps?" and "Absolutely Free" both fade out really abruptly, because they were seamlessly edited into other tracks on the original version.

So, nothing too major, but it's interesting for what it is. There's also some spelling errors in the tracklisting on the back, the most blatant being on "Son of Suzy Creamcheese," where they have it spelled "Son of Suzi Cream Cheese." Not helping their cause.

I have a pretty beat-up copy of this record, but I'm always hesitant to replace it with a better one. It's actually kind of hard to find, and I never listen to it. Eh, the vinyl's in fairly good shape, and that's probably enough for me.

"Flower Punk"
Posted by Wockenfuss at 1:04 AM