The Mothers of Invention - Weasels Ripped My Flesh (LP, 1970) 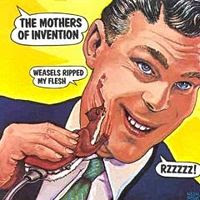 I mentioned earlier that The Mothers released two albums post-breakup, both containing previously unreleased material. Burnt Weeny Sandwich was the first, and this one's the second. While the style of music is relatively the same on both records (long instrumental songs, some experimental stuff), Weasels Ripped My Flesh is a bit looser, probably due to the fact that the majority of it was recorded live.

Still, it doesn't necessarily sound live, which makes for an interesting feel throughout the album. Meaning - and I guess this is the most significant aspect of the "not sounding live" part - you don't often hear the crowd, even during the quieter breaks in the songs (of which there are many). But, you can tell from the recordings that these aren't studio takes - there are minor blips and voices heard, and there is certainly some improvisation (within the predetermined structure of the song, of course) taking place. But it's not until the end of each side of the LP that you hear the audience applaud.

Recording his band live and not necessarily listing the album as such became a go-to move for Zappa, and I think this record might have represented that method in its nascent stages. This record also features another favorite move of Zappa's: blending two different recordings to form one complete song. "Toads of the Short Forest" contains two different sections, the first recorded in the studio, and the second recorded live. They blend seamlessly, and you wouldn't know it unless you read the liner notes. "The Orange County Lumber Truck" contains portions of two different live recordings, which must have been the better sections of each performance.

If Burnt Weeny Sandwich was meant to challenge listeners, Weasels Ripped My Flesh certainly wasn't intended to cut them any breaks, either. A track like "Prelude to the Afternoon of a Sexually Aroused Gas Mask," which in its second half contains long portions of Roy Estrada howling, is sure to send the uninitiated running. Same with the title track, which is pure noise for two minutes. But, while there's also some of the Mothers' trademark hyper-technical instrumentals, there's also some really accessible material here.

"Directly from My Heart to You" is a Little Richard cover done in a straight-up blues style with great vocals from guest Don "Sugarcane" Harris. "My Guitar Wants to Kill Your Mama" (in its first released version here) is a catchy tune with uncharacteristically forceful lead vocals by Zappa. And "Oh No," previously heard as part of Lumpy Gravy (Zappa's first solo record that we'll get to later), is mega-catchy.

Again, would I recommend this to someone who hasn't already tried out The Mothers of Invention? Nah. But I love this record. If nothing else, the cover's great and the abstractness of the music will impress your friends. Or drive them away. Whatever.