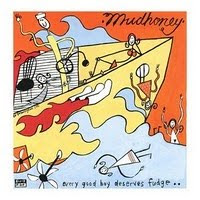 Does it get much better than this?

Mudhoney picked a great time to put out their best record, and this thing, while summing up everything that was great about early-90's rock, is untouchable from start to finish. From the organ intro (!) on the instrumental first track, "Generation Genocide," to the aptly-titled last track, "Check-Out Time," this record never stops. (Aside from the weird little harmonica-blowing intro to "Into the Drink," which I would love to know the story behind.) It's a front-to-backer, folks. Put it on and walk away from the stereo.

While Mudhoney were great on their first LP, they're certifiably brilliant on this one. The hooks are infectious, the recording quality has stepped up (but not too much), and guitarist Steve Turner, who was previously probably considered "good for what he's doing," is now "good" without any need for a further disclaimer. Songs like "Good Enough," "Something So Clear," and "Pokin' Around" are among the best Mudhoney would ever make, and I could really say that about almost every track on here.

Mark Arm is still unlucky in love, but instead of sounding overwhelmed with bitterness, he seems merely fueled by bitterness (which is a little bit better, right?), and he uses it to wrench all sorts of energy and even a little bit of hopefulness out of some of the songs. Tracks like "Thorn" and "Into the Drink" even make it seem like it's getting over things. Either that, or he's ready to murder someone. Whatever works.

I watch documentaries about the NW scene, or grunge, or whatever they want to call it, and people always say stuff like "I really thought Mudhoney was going to be the breakout band from Seattle." I'm not sure if I really understand that. Even when I was huge fan of theirs during this time, which was probably the peak of their popularity, I never felt like the mainstream would be accepting of them. They always struck me as that lovable gang of misfits who might get close to the big prize, but never really hit the big one. And that's exactly why I thought they were so awesome, and exactly why I still think they're so awesome. When they signed to a major label, I always pictured that these guys were finding a way to fuck up the system from the inside. Maybe that's just wanted to think. I don't even really know where I'm going with this.

But I do know that this would be Mudhoney's last album before they signed with a major, and they made it count. If you met somebody and they wanted to know what "grunge" sounded like, you could hand them this. I don't know if that's a good or a band thing, but like I said, this record sums it all up in less than 45 minutes. It's some landmark shit. And I say that in the midst of a huge Mudhoney phase that I've been wrapped up in for the last few weeks, but I mean it. This is a good one.

"Good Enough"
Posted by Wockenfuss at 1:02 AM

An analogy if you will. If Nirvana's "Nevermind" was my weed, my gateway drug into "alternative" music as a 12 year old boy, then I would say that this album was like my cocaine. It completely sealed the deal for me. This kind of music was for me. There was no going back. It was obsession time. I'll never forget how it happened (pre-internet days of course). Being into Nirvana I knew of the SubPop label and was of the understanding that they only put out cool music. I happened upon a small rectangle ad in the back of a Spin magazine advertising this album that had nothing other than the album cover and a picture of Mark Arm and Steve Turner. The picture was in their to call attention the fact that they had cut their hair. I don't know why but I decided that I really wanted this album sight/sound unseen/heard. Maybe it was the cover. Maybe it was the SubPop label. Maybe it was the haircut thing. Who knows? All I know is that I begged for the cassette for Christmas and got it. I think I got this and Rush's "Moving Pictures" that Christmas, just to illustrate how young and confused I was (I wanted "Tom Sawyer" since it was Kerry Von Erich's entrance music in World Class. Seriously). Anyways, my luck could not have been any better as this album proved to be perfect from start to finish. I'm not just saying that. It actually is. I never understood how this album didn't blow up more, especially at the time. More than any Nirvana album I think this album perfectly captures everything good about "grunge" (if one dares use that horrible word). Rather then just grunge though, this is just an insanely clever and catchy rock album. Every song is mixtape worthy. "Let It Slide," "Who You Drivin' Now?," "Generation Genocide," "Into The Drink," heck all of the hits are here. Pure NW genius.