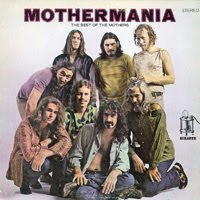 Zappa/Mothers fans get a boner for this early "best-of" LP, and there's a few reasons for that.

First, it's the only Mothers of Invention compilation that was ever authorized and hand-picked by Zappa himself. There were a few others released later (we'll get to those), but this was the first, and many hardcore enthusiasts consider it - because of FZ's stamp of approval - the only one worth owning.

Second, this album - while containing previously released material - contains different edits of a few tracks. For instance, on Absolutely Free, "Call Any Vegetable," "Invocation & Ritual Dance of the Young Pumpkin," and "Soft-Cell Conclusion" all bridge together to form one long song, based around the "Call Any Vegetable" refrain. On this record, "Invocation" (which is a seven-minute instrumental break) has been removed, with the two surrounding tracks combined and called, simply, "Call Any Vegetable." There's also a few extra bars of filler in there to join the two sections.

On Freak Out!, "Help I'm a Rock" is listed (on the vinyl only) as "A Suite in Three Movements," with the first being "Okay to Tap Dance," the second being "In Memoriam, Edgar Varèse," and the third being "It Can't Happen Here." On Mothermania, "It Can't Happen Here" is removed from the suite and stands alone as its own song, but it's also a different edit with an abruptly looped ending and a few additional spoken words from Zappa. (In the original version, Zappa tells Suzy Creamcheese that they've been "very interested in [her] development." On this version, he adds, "since you first took the shots.")

However, the major factor in all this (and I probably should have mentioned this first) is that this remains one of the only Zappa-related albums that has never seen an official release on CD. The Zappa family finally released it as a digital download this past year, but the only physical copies to own remain the original LPs. There are different versions of these, as well, and though I don't know how many, the label variations on the LPs themselves seem to determine the price.

I held out for a long time before picking up a copy of this LP, because record store jerks frequently try to jack up the prices on copies that aren't that great. My wait paid off, and I found a copy in incredible shape for a reasonable price. As it stands now, it's probably my most valuable Zappa LP. I checked some completed listings on eBay, and was surprised by how much a copy identical to mine sold for. So that's pretty sweet.

Now keep your dirty mitts off of it.

The Mothers of Invention, Live in 1968
Posted by Wockenfuss at 1:23 AM