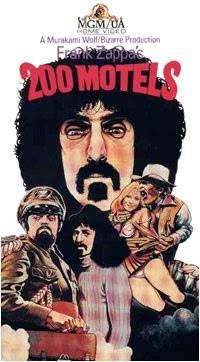 Before I had seen either of these movies (for the first time, many years ago), I had some slightly exaggerated expectations for both of them. It was The Mothers; how bad could it be? Plenty bad, of course. But re-watching both of them, I already knew basically what I was in for, so I just relaxed and took them for what they have since come to represent: The Mothers captured on film during their still-kind-of-early days. Which is cool, regardless of things like "story" or "plot." I also watched them by myself this time around so I didn't have to apologize to anyone for subjecting them to these flicks.

As I said during the recap of Fillmore East - June 1971, Zappa was, throughout this short era, entirely consumed with life on the road. Specifically, what a semi-struggling rock & roll band has to go through on a day-to-day basis. If you take the time to try and figure out what 200 Motels is about, this is probably what you'll roughly come up with. But, it's tough to glean a whole lot more than that from the acid-y random segments (ironic, considering Zappa's staunch anti-drug stance and hatred of psychedelic culture) and loosely scripted vignettes of air-headed groupies and frustrated rockers.

I have to be honest: it's really hard to explain a film like 200 Motels, especially without explaining how each character (usually a member of the band, in this case, and usually reliant on the viewer's knowledge of who they are in relation to The Mothers) relates not only to the equally inexplicable plot, but to the nonsensical happenings around them. This movie watches like a dream, literally. The only difference being that there's some really good music in certain sections. Of course, Zappa's barely in it. It's mostly Flo & Eddie, and a little bit (but not nearly enough) of Don Preston.

The final scene is fantastic, with both the movie and the music building up to a huge ending. But really, it's just the fact that this thing got made that ends up being the most impressive thing about it. Nobody seems to know what they're doing, they never leave the one room they're in, and nothing really happens. Yet Ringo Starr and Keith Moon are both in it. It's just incredibly fucking bizarre. And if you're a fan of this era of Zappa, you should see it. Just to say you saw it.

I'm planning on watching it every decade or so.

I rented this on a first date with a girl in high school. True story. Worst decision ever.