Stallion Alert at the Movies: Uncle Meat: The Mothers of Invention Movie (1987) 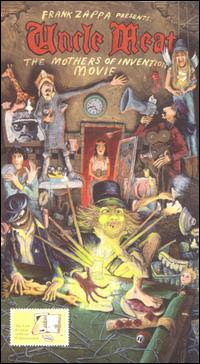 Thank goodness for Movie Madness. When you need to rent a straight-to-video release from Frank Zappa's Honker Home Video that was put out on VHS in 1987 and never released to DVD, you can count on them. I think they had three copies. Which is sweet, because I really didn't want to shell out forty bucks for it on eBay, when I know it'll see a DVD release at some point in my lifetime.

Here's the deal with Uncle Meat (as far as I know). Zappa and the Mothers started filming the flick around 1968, quickly ran out of money and time, and never finished it. Almost twenty years later, Zappa pieced the footage they did have together and released it to home video independently. Mothers fans had been waiting for it forever. How did they know about it? Because The Mothers released the soundtrack to it in 1969 (we'll get to that next), with this subtitled on the front: "Most of the music from the Mother's (sic) movie of the same name which we haven't got enough money to finish yet." So, the legend was born.

Was it worth the almost two-decade wait? I could probably find some folks who would tell you it was. But those people would be hardcore Mothers fans. This movie is not for the casual fan, my friends. Though, I do have to say, it was not nearly as boring as I remember it being. I watched it about ten years ago and really struggled with it. This time around, I knew what I was in for, so I just sat back, relaxed, and watched keyboardist Don Preston (in the title role) dick around for almost two hours. And really, that's all it is.

There's a loose story about the love between Uncle Meat (aka Don Preston aka Biff Debris) and Sheba Flieschman (aka film editor Phyllis Altenhaus, who also plays herself), which is both portrayed as part of the scripted film and part of the making-of documentary, which is sort of what the movie ends up being anyway. Sheba gets excited when Don transforms into Uncle Meat, but she can't understand why. He attempts to coax her by drinking dry-iced concoctions and rubbing her all over with raw hamburger. Cal Schenkel also plays a cymbal with pliers in the middle of a supermarket aisle. Confused yet? You should be. Because it barely makes sense.

But for some (and sadly, I'm one of these), watching the original Mothers dick around for an hour and a half ain't too bad. But, here's the crap part: Zappa's barely in it, and there's hardly any actual music in it. They show the stage show where the Uncle Meat character came from (sort of), but it's cut short after only a little music. And later in the film, there's a short bit of "Mother People." There may be a few other short interludes, but that's about it.

But, hey, if you want to see Don Preston naked in the shower rubbing raw meat all over a fully-clothed girl, this is the flick for you.

Long clip of Uncle Meat here.
Posted by Wockenfuss at 1:00 AM

I am pretty sure I have watched this with you and it is terrible. I have seen lots of crap movies and this ranks highly up there with the worst of the worst. However, I am not a die-hard Mothers fan so admittedly this movie was not aimed at me. If there was a movie of Unwound dicking around a stage and frustratingly doing anything but playing music, I am sure I would love it.