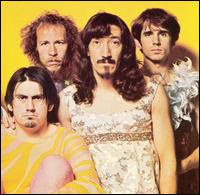 One of the greatest albums of all time? Depends on who you talk to. If you talk to me, I'll tell you that it is. This is The Mothers' crowning achievement, an album that is musically dense, insanely complex in its structure, completely hilarious, and just all-around amazing.

There are a few different versions of this album, and if you care about that, read the Wikipedia article here. I was first introduced to this gem via the aforementioned RYKO re-releases that sprouted up in the mid-90's. I had no idea that Zappa had gone back and overdubbed some bass and percussion parts. It wasn't until I bought an actual LP copy (I'm not completely happy with mine - it doesn't have the original insert) that I heard the album as it was originally released. The CD version I played incessantly - and still have - is produced terribly; it's one of the quietest CDs I own. They've since RE-re-released it, and it sounds better. The version I have includes Lumpy Gravy, Zappa's first solo album. Anyway.

If you like hippies being skewered mercilessly - and who doesn't - then this is the album for you. And while the trampling of Flower Power is fantastic, it wouldn't be shit without the songs on this record. Every single one is great, and really shows Zappa coming into his own. He's bitter, driven, and must have been determined to show The Beatles what was really going on. And anyone who thought The Mothers were a tripped-out, acid-fueled, psychedelic band got set straight with this one. "Who Needs the Peace Corps?" takes care of that early on in the proceedings.

From there, the brilliance just escalates. Songs like "Concentration Moon," "Mom & Dad," "What's the Ugliest Part of Your Body?" - heck, really just the whole damn thing - are so immediately enjoyable that I dare you not to love them. (I made the mistake of daring girls not to love them in college, and they gladly obliged. Zappa will not get you laid, gents.)

Still following the template of a loose concept album, this record is the big kiss-off to the hippie movement, specifically those who seem to be obsessed with something that they don't even care to understand. "Flower Punk" is perhaps the most scathing of these cuts, and it's also one of my all-time favorites.

I lived in Eugene when I first got into this record, and the timing couldn't have been better. My tolerance of the "hippies" grew thin within the first few months of being there, and this album provided much ammo against the folks I despised. But like I said, it wouldn't have meant jack without the great songs that this album contains. I've often called this one of my favorite records of all time, and I still stand by that. I can still listen to it and love it, and I'm going on 15 years of it being a part of my life.

When I said you should start at the beginning with The Mothers, I should have said you could also start here. If you don't like this album, you won't like The Mothers. But if you do, you'll immediately want to hear more.

"Mother People"? Brilliant. "Let's Make the Water Turn Black"? One of the greatest songs ever. "Take Your Clothes Off When You Dance"? Practically perfect. I can't say enough about this one, folks. I know Zappa's not for everyone, but I'd urge you to give this one a shot.

"Let's Make the Water Turn Black"
Posted by Wockenfuss at 1:44 AM

This is hands down my favorite Zappa album (I know it's the Mothers but you know what I mean). Pretty much every song on here is incredible. Also, the theme of hippy-bashing that is present throughout is something that truly speaks to me. "Let's Make The Water Turn Black" is a perfect song. "Take Your Clothes Off When You Dance" and "What's The Ugliest Part Of Your Body?" are equally genius songs. Speaking of genius, does it get any better than "Flower Punk?" There is one minor complaint. While many Zappa albums have the requisite noise tracks. "The Chrome Plated Megaphone Of Destiny is a pretty lazy and uninteresting one, and makes for lackluster finish. Still, this record is pretty undeniable.

Hey punk, where you going with that flower in your hair?