Stallion Alert at the Movies: Frank Zappa and The Mothers of Invention in the 1960's (2008) 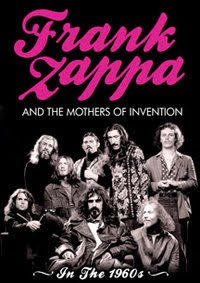 Because I am an idiot, I just found out this movie existed a few weeks ago. Without hesitation, I Netflixed it, and then watched the shit out of it. I had no idea what to expect, but I came away completely satisfied. If you want a two-hour crash course on the original Mothers of Invention, this'll do the trick.

Starting with the roots of the Mothers, this movie documents (it's a documentary, if that's not clear) Zappa's early musical life, briefly, then dives right into the story of how the Mothers formed. After that, each of their albums are discussed in fairly great detail, chronologically. My kind of movie. It's logically constructed, and the story is told mainly through the interviews, with minimal narration. Clips of the Mothers performing are included (though there's nothing new and the bits are usually short), and music from each album plays while it's being dissected. Like I said, it's put together nicely.

The interview subjects are a varied bunch, and I've seen some online reviews criticizing the film for the long-winded answers and explanations that some of the interviewees are allowed. Yes, some of the segments are long. But, the dudes interviewed (at least the ones that I've seen complaints about) are music nerds who have done their research and get almost every point correct. On top the biographers and music geeks, there are also, thankfully, interviews with some of the original Mothers of Invention: Jimmy Carl Black, Bunk Gardner, Don Preston, and Arthur Tripp are all in the film, and it's their first-person accounts that really make the film.

While it's clear that the ex-members do harbor a little bit of bitterness (mostly regarding Zappa's oddly-timed dissolution of the group), they spend most of their segments recalling the more positive experiences they had with the band. Jimmy Carl Black, particularly, has some great stories to tell, and his pride in being in the band is apparent in every one he tells. There are tales of the infamous Zappa audition process, shows gone completely wrong, and what it was like to be in a band that rehearsed for hours a day, almost every day.

Personally, I didn't find any of it windbag-ish at all. Yes, some of the people interviewed weren't actually there, but they know what they're talking about. I even learned a few new things about the chronology of some of the recorded output, and seeing the current interviews with the Mothers members (especially Jimmy Carl Black, who died shortly after) was fantastic.

It might be a little to detailed for someone who just wants an overview of the band, but if you're looking for some analysis and some in-depth discussion of all the original Mothers of Invention albums, this is a great way to find it all in one place. I recommend the heck out of it.

You can watch the first few minutes here.

And by gosh, I think that does it for The Mothers. We started on January 1st, and here we are on the 24th. Three and a half weeks, folks. Thanks for hanging in there. Now go buy Freak Out! and introduce yourself to the greatest band ever.
Posted by Wockenfuss at 1:27 AM