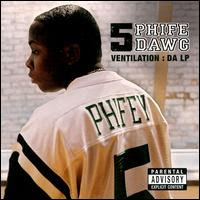 I'm not the biggest Tribe Called Quest fan, but I got into their stuff for a while. Q-Tip had some solid lyricism, but for me, Phifey was always the one I looked forward to. He had some insane verses on all the Tribe records, with one of my favorites being, "And if I ever went solo my favorite MC would be me."

Phife Dawg did go solo, and while Q-Tip was wearing fur coats and rocking the idiotic "Vivrant Thing," Phife was keeping it realer than real. And I dug the shit out of it. This record never got the props it deserved, and that's probably because Phife made a point of calling out all the materialism in hip hop. Funny how that works. The beats on this LP aren't all winners, but they're solid, and the Five-Footer drops some serious knowledge.

It's a shame he hasn't put anything out since. I got really into this record for a year or two and then sort of lost track of it, but it's always nice to come back to when I want to hear some full-on MCing. It's good to have records like that around. Someone's got to keep these rappers in line.