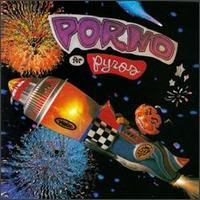 Though there were a few years between Jane's Addiction's last record and this, Perry Farrel's new project, it wasn't like he ever went away. Lollapalooza was in full effect, and Perry was just around. I remember being excited when this came out, though I thought that the band name was supremely hacky. It remains hacky.

Turns out this album is pretty good, though. I think its simplicity let a lot of people down after the crazy ambition of Ritual de lo Habitual, but whatever. This record sort of sounds like old Jane's Addiction stuff, and any space afforded by the slightly sparse nature of the arrangements just leaves more room for Perry's voice, and there's nothing wrong with that. I actually enjoyed that they stuck to three-and-four minute rock songs, and didn't try to do anything too fancy. If you would have asked me to guess, I would have said that Perry would have come out with something that was trying way too hard. And he didn't. And that was cool.

This record sounds a little dated now, though I still remember why I liked "Meija," "Bad Shit," "Packin' .25," and "Blood Rag." They're great songs, and actually deceptively complex. There's a good amount of variation in the tempos and styles, and they all work. And really, there's not a terrible song on here. "Pets" got played out pretty quick, but it's a catchy tune. I even have a soft spot for "Black Girlfriend" and "Orgasm," even though they're both fairly stupid if you think about them too much.

Still, '93 was a good year for rock, and I definitely played the shit out of this record. It remains the last really good thing Perry Farrel did. And it should at least be remembered for that.

I chuckled at your comment that this should be remembered as the last good thing that Perry Farrel ever did. Because that is so true. His journey from coolest guy to lamest guy was quick and brutal, and pretty much began right after this came out. I have fond memories of this album and actually preferred it to Jane's Addiction. I always felt like Jane's was really for weed heads and I wasn't a weed head. I mean, how else could anyone really enjoy "Three Days?"

I remember this being one of very few CDs in our house and the sound of it was very clear. "Sadness," "Cursed Female," "Cursed Male," and "Pets" were always my jams. Who knew Farrel would go on to suck so incredibly hard?