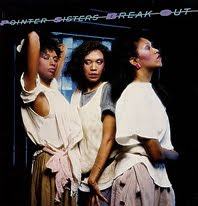 At some point last year, I decided that the Pointer Sisters' "Jump" was one of the purest pop songs of the 1980's. I was right, of course, and apparently the feeling lingered long enough for me to remember to buy this LP the next time I was out record shopping. Was it worth the dollar I paid for it. Yep. This record's pretty sweet.

It's also got "Neutron Dance" (their other big hit), and "Automatic" (not as big of a hit). Man, I miss the 80's. A time when old people could be cool-ass pop stars. Ruth Pointer (the one on the right) became a grandmother the same year this came out. She also sang like a dude. So that's cool.

I always thought June Pointer - the one on the left with the jacked-up teeth and overall weird look - was strangely attractive. Is that right? She's dead now, so maybe it's just inappropriate.

Anyway, this is some fun-time 80's synth-pop with mad slick production. Get with it. Or don't.