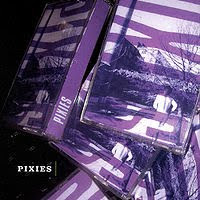 I was completely unaware of the "Purple Tape" for a long time, but when I found out about it I was understandably intrigued. This CD compiles the nine songs that weren't taken from that tape and put on Come On Pilgrim.

And while this is definitely a must-have for serious Pixies fans, it's kind of a bummer that it's only 16 minutes long. Still, there are some things here that no Pixies ultra-fan can live without. Eh, fuck it: let's just break it down.

"Broken Face" - Not as strong as the Surfer Rosa version, but that's only because Black Francis sounds strangely tired on it. Still cool as shit.

"Build High" - The original verision! Hadn't changed much by the time they re-recorded for a Trompe Le Monde-era b-side, but this version is certainly much looser.

"Rock A My Soul" - Oh my lord, a previously unheard Pixies song. This is what everyone was looking forward to when this thing came out. Is it mind-blowing? Nah. There's a reason this is the only song here that never even made b-side status. Not that it's not nice. Because it is. Definitely a solid Pixies short one.

"Down to the Well" - The original version of this song, that would eventually make its way to Bossanova. The vocal feel is different and it's not as explosive, but I love this one.

"Break My Body" - A little bit different arrangement than the Surfer Rosa version (no intro), but otherwise it's basically the same.

"I'm Amazed" - Here's why we buy these things. There's a middle section on here that didn't make it onto the album version of the song. It's short, but it's really cool to hear.

"Here Comes Your Man" - This is another big reason fans need to have this: the original version of the Pixies' poppiest song. It's not quite as polished, and a great reference point.

"Subbacultcha" - A crazy version of this track, which wouldn't see the light until Trompe Le Monde. This is another one that contains extra shit - an short bridge and eventual outro thing that would end up being the basis for "Distance Equals Rate Times Time" from Trompe Le Monde. Really weird, and fascinating to see how the songwriting process works.

"In Heaven (Lady in the Radiator Song)" - Probably the least strong version of this song that exists, but it makes a nice little ending to this odd-ass batch.

If you're a big-time Pixies fan, you'll want this. But man, I'm having a hard time shelling out 30 bucks for the vinyl version, knowing how short it is and how often I'll listen to it...

"Subbacultcha"
Posted by Wockenfuss at 2:00 AM

30 bucks for this on vinyl? That is a rip. Is it just me or is "Subbacultcha" their weirdest song? I have always had a hard time with that tune and hearing it here even further perplexed me. Aside from that I find this album pretty interesting in a loser-nerd sort of way. The way one is supposed to enjoy these things.