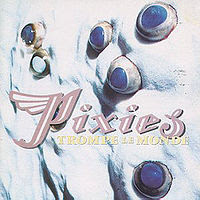 This was the only Pixies album I bought upon its release, and I really could not have been more excited. I immediately loved it, and continue to do so to this day. The band brought back some of the rougher edges that had been smoothed out on Bossanova, and Black Francis wrote some incredibly strong tunes for this record.

Apparently it's not everyone's favorite, but I could easily make an argument for this being the band's best record. Between this record and Frank Black's first two solo records, you've got the golden era of the man whose real name is Charles Thompson. I could go deep into into my Eric Drew Feldman theory right now (he plays on all three of the records), but I'll spare you that. So let's get to the songs and why they're so great.

"Trompe Le Monde" - This was the only Pixies record that took its title from the name of a song and not a lyric from a song, and they just went ahead and put it right out front. And that's where it should be. A great tune to start off with.

Random: In the break in this song, Black Francis sing/talks: "We went to the store and got something great/ Which samples this song from Washington State." A friend of mine in high school had this weird Radio Shack megaphone that not only amplified your voice, but also played college fight songs. Among them was the one from Washington State, and it played it just like the little blips that come after that lyric in the song. We were convinced that this megaphone is what they were talking about. I still am.

Also: This version of the band playing the song on Letterman remains bizarre and awesome.

"Planet of Sound" - If anyone was concerned about whether the Pixies were getting soft, this should have assuaged those fears. What a badass tune. "This ain't no rock & roll town/ This ain't no fuckin' around." Exactly.

"Alec Eiffel" - What an incredible melody (as usual), and Kim Deal really makes it work on this one. One of the singles from this record, and it's definitely one of the more accessible tunes.

"The Sand Punk" - This track contains one of my favorite Pixies lyrics ever: "And evolving from the sea/ Would not be too much time for me/ To walk beside you in the sun." It really doesn't get much better than that. Love this song.

"Head On" - The second of the only two covers that made their way onto proper Pixies albums. It's a fine song, but I prefer their original material.

"Palace of the Brine" - One of two minute-and-a-half ass-kickers on this record. This song is untouchable.

"Letter to Memphis" - I always think of this one and "Palace of the Brine" as a one-two combo that should not be separated, because the break between the two songs in short and seamless and they really work well as a pair. Not sure if this is supposed to be a love song in the traditional sense, but it sure works as one.

"Bird Dream of the Olympus Mons" - Leave it to Black Francis to write a frighteningly beautiful song about a bird dreaming that he flies to Mars. These lyrics are insanely good, and the buildup in this song is flawless.

"Space (I Believe In)" - One of the longer songs on the record, and though I certainly like it, it's not one of my favorites. The end is great, though.

"Subbacultcha" - I never had any idea that this was one of the earliest tunes that Black Francis wrote for the band, and I was a bit surprised to find out that it was. It fits in fine with the rest of the songs here, though it remains one of their weirder tunes, which is saying something.

"Distance Equals Rate Times Time" - I always forget the name of this song because "D equals R times T" is mentioned in "Space (I Believe In)" and it mixes me up. This is the other minute-and-a-half ass-kicker on this record and it will knock you over.

"Lovely Day" - Apparently not one of the band's most enduring songs, but I always felt it deserved to be. Wish I had the faintest idea what this song is about, because I bet it's interesting. "You will be my martian honey all the day" makes me very curious.

"Motorway to Roswell" - Black Francis was still obsessed with aliens (and would continue to be), and this song seems to tell the fractured tale of an outer space visitor who ended up somewhere he didn't want to be. It's the longest song on the record, and it deserves the extra space.

"The Navajo Know" - The last song on the last Pixies record, and though I don't know why, it seems like a fitting send-off. It's got a great little melody, obscure-as-shit lyrics, and makes little sense. I love the production on this track.

It's possible that I've listened to this LP more than any other Pixies record. I had it on cassette right when it came out, and it got a lot of play. Tons. Sometimes I still think this is my all-time favorite Pixies album, but that remains a tough call to make. I guess it's safe to say that it's right up there with all their other ones.

And this would be it for the band who pioneered alternative rock and then broke up before they could enjoy the landscape they created. I always thought that was a sweet move. Don't worry, though - there's a bunch more Pixies stuff coming. Settle in.

"Head On"/"Bird Dream of the Olympus Mons"
Posted by Wockenfuss at 12:46 AM

Holy crap, we used to listen to the hell out of this album. You allude to the fact that its not everyone's favorite, and if that's true then those people are straight up idiots. This record is near perfect and has to be my second (sometimes first) favorite of theirs.

"Trompe Le Monde" the song is simply untouchable. "Alec Eiffel" is pop perfection and somehow pulls off being a sincere tribute to an architect. "The Sad Punk" seems to be a forgotten gem of theirs but has always been one of my favorites. The ending is gorgeous.

Don't front. You use to LOVE "Head On." You even bought The Jesus and Mary Chain cassette because you loved that song so much. I still do. I'm not too cool. I have a distinct memory of catching the last half of this video at Grandma's house and being blown away at how awesome it was and having to wait like 5 years to see it again (these kids today with their Youtube).

People have tried to ruin "U-Mass" for me but I have fought that off. I agree with you that "Palace Of The Brine" and "Letter To Memphis" should always be joined at the hip. Also, they are both astounding in their awesomeness.

Speaking of awesome, "Bird Dreams of the Olympus Mons" has to be one of Frank's crowning achievements. Its one of those songs that I have heard a million times yet still manages to give me goosebumps every time. The melody and lyrics are simply unbeatable. I remember really loving that Denis Miller performance at the time.

Also, how could anyone not love "Motorway To Roswell?" I have some weird memory of listening to this album for the first time in a while in my 20s and all of a sudden this song hit me. It was like I had never fully paid attention to it before. It was odd. Lord knows I share Frank's affinity for aliens and he somehow once again pulls off an earnest and heartfelt song about a topic that could be real lame if done the wrong way.

Although this album will forever remind me of being 14 it has aged incredibly well. If I hear someone front on this I will punch them in the stomach.

And that clip of them on Letterman is surreal. How did we not catch that at the time? What a bunch of rooks we were.