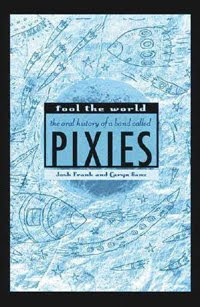 I had been meaning to read this book after I first read excerpts from it in Spin a few years back, but I forgot about it. Getting back into the music of the Pixies over the last few weeks jogged my memory, and I picked this thing up and read the shit out of it.

Other than the authors' annoying insistence on making it very clear that there is no "the" in front of "Pixies" (the title of the book is just the beginning), this book is fantastic. (And yes, we get it: the band is just called "Pixies." But everyone calls them the Pixies when speaking casually. Don't capitalize the "the" and move on. Sheesh.) It's exactly what it says it is: a history of the band told through the people who lived it. The full band participated, along with 4AD staffers, members of fellow bands (Throwing Muses, most notably), producers, friends - a ton of people.

And though there is perhaps a bit too much focus on the inner workings of the Boston scene that quickly spit out the Pixies after their formation, there's a ton of inside info pertaining to the inner workings of the band itself, as well. Though there's nothing mind-blowingly new here that superfans haven't heard before, there's plenty of cool stories of little things that happened here and there along the way that I had no idea about.

It's easy to forget that the band was together for such a short time, but this book really puts that into perspective, and gives you a plethora of reasons why they broke up when they did. There's the usual flogging of Bossanova and Trompe Le Monde, which I cold do without, but there's also some great stories of how those records became what they were, and I was happy about that.

This book is probably for the more serious fans, but if you consider yourself one of those, you'll love it.
Posted by Wockenfuss at 1:30 AM