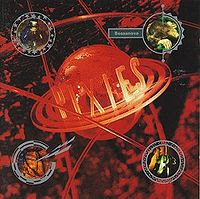 Some years back, I was talking with a friend who I went to high school with. We were listening to Bossanova in his car. He said, "Do you remember back in high school when everybody said that Bossanova was the one Pixies record that wasn't very good?" I said I remembered that. He said, "What was up with that? This album's incredible."

And indeed it is. But that was the word on Bossanova after it came out: "It's OK, just not nearly as good as Doolittle. Bossanova was the last Pixies album I bought before Trompe Le Monde came out, and though I didn't really put it off, I was hesitant, because everyone framed it as a huge disappointment. Then I bought it, loved it, and wasn't sure what the fuck everyone was talking about. Yeah, there's a lot less of the loud-quiet-loud dynamic on this one (mostly in favor of just plain loud) and the drums sound like machine guns, but if there exists a sorely underrated Pixies record, it's this one.

Maybe people were put off by the surfer-girls-in-outer-space theme that runs through this thing, but I always thought that was quite charming. And though this record is notorious for being the one that almost broke up the band, maybe that's what makes it so wonderfully tense-sounding. This is usually where people start complaining about Kim Deal not singing enough on the late Pixies records, but I've never understood that. She's all over this thing.

Like all the other Pixies records, this one has often been my favorite. In fact, right now, it's probably holding the title. "Is She Weird," "Ana," and "Allison" remain some of the band's best tracks. And this thing is sequenced beautifully, just like all the other Pixies records. Don't think I've mentioned that yet, but they really were masters at putting the songs in order. I can't picture their albums switching the tracks up and being any better than they are. With that in mind, let's start at the top:

"Cecilia Ann" - There were only two cover songs that made their way onto proper Pixies records, and this one's the first. Originally a straight-up surf tune, the version here is obviously way more electric and way bigger. A great choice to set the stage for what's to come. This also holds the distinction of being the only instrumental song on any of the Pixies' studio albums.

"Rock Music" - The title only begins to describe the blistering menace of this tune. The lyrics are fairly indecipherable on the album version, and they didn't bother to print them in liner notes. Bold move. You can sort of make them out in live versions. They make little sense. Incredible song.

"Velouria" - One of the Pixies' more blatant stabs at semi-mainstream appeal. Not my favorite song, but it does have a ton of charm. And the bridge is great.

"Allison" - Black Francis' shout-out to Mose Allison, which also works well as a love song. This melody is unstoppable. I have a promo single for this song that contains this song and this song only. It is one minute and eighteen seconds long.

"Is She Weird" - There was a bootleg video of a Pixies show in 1991 at the Brixton Academy that I used to rent all the time from a local video store. The whole thing was amazing, but their performance of this song was always the highlight. "Your heart is ripshit" is just a staggering lyric. One of my favorite Pixies songs. Among many.

"Ana" - This is the one with the tricky lyrics that spell out "surfer" with the first letter of each line. That novelty always struck me as odd for this band, but this song is so beautiful that I was never paid it much mind.

"All Over the World" - The last song on the first side of Bossanova, and easily the band's longest song. From a group known for keeping things around the two-minute mark, getting into the five-minute-plus realm was certainly unexpected. I've always thought it was pretty cool that they only did it once. And this song deserved it - the ending is sweet.

"Dig for Fire" - I'm pretty sure this was an old song that got resurrected for this album (much like "Subbacultcha" would on their next record), and it was probably a smart move, because it fits in perfectly with this group of songs. The single version is different than the album version. No idea why.

"Down to the Well" - Where Black Francis gets all guttural with his wailing and screams out "I can hardly wait - Betty" like no one else could. Awesome.

"The Happening" - On the "Velouria" single, there's a song called "The Thing" which is a standalone version of the second half of this song (though a different recording). Wish I knew more about how this thing got put together, but I don't. I do know that this is one of many songs Black Francis wrote (or would write) about aliens landing here and how he would like to hang out with them. ("They've come so far I've lived this long/ At least I must just go and say hello.")

"Blown Away" - Another song with a great hook that is further proof that the Pixies were masterful at the two-minute pop song.

"Hang Wire" - The song from which the album takes its title, and another one where Black Francis gets all blood-curdly with the vocals. Kim Deal is great on this one.

"Stormy Weather" - It is time for stormy weather. Indeed.

"Havalina" - Every time Kim Deal sings "Arizonaaaa," I still get chills. A legitimately pretty song, and a great one to close the album out with.

I have a very early copy of this record on vinyl that contains the rarely-seen 10" booklet on the inside. A few notes on this:

This is the only Pixies album to contain photos of the band on the inside.

The booklet does not contain the lyrics to "Rock Music," "Havalina," or "Havalina," but for some reason, it has the lyrics for "Make Believe," a song that was another b-side of the "Velouria" single. Weird.

This record is incredible. You know that.

As an adult, I have really embraced "Bossanova." I know as a youth I enjoyed it but for one reason or another it didn't have quite the same hold over me as their earlier albums. And I don't really know why. I know that I used to listen to side 1 and then rewind it and listen to it again. To this day side 2 of this album are probably the only Pixies songs that I don't know back and forth, save for "The Happening" which has always been my favorite song on this album (except for "Rock Music"). The 2-part song structure, all about aliens, really did the trick for me, especially since Frank seems performs it without a shred of silliness. I am pretty sure it is a dead serious tune, which makes it all the more endearing to me. "Rock Music" appeared on many mixtapes I made back in the day. I always thought he said "I break your mouth." I probably always will.

I think this album's bad rap comes from the sequencing. The first half packs a wallop but there is little consistency. And then side 2 is more straightforward and at times kind of blends together. I am probably wrong, but rearranging the album to space out the odder, catchier songs (which are all front loaded) and I think people would jump all over it.

Whatever. It is still pretty awesome and part of me thinks we all think it is really rad now just because we haven't heard it a million times like the other ones. At least I haven't.

Oh, and I always thought that "Allison" was about a chick. Of course it's not. I should know Frank better than that.